Patient had "Do Not Resuscitate" tattoo...so here's what doctors did (wow) - The Horn News 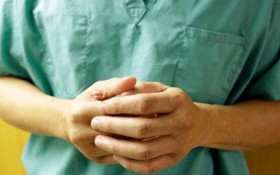 It was a scenario that emergency room doctors at Jackson Memorial Hospital had discussed but never seen in person — an unconscious patient with a tattoo across his chest that read “Do Not Resuscitate.”

The 70-year-old man at the Miami hospital posed a vexing ethical dilemma and a decision needed to be made fast. His blood pressure was dropping and he wasn’t breathing well. He had a history of chronic obstructive pulmonary disease, diabetes and he had a high blood alcohol level.

“If we didn’t do something soon we were going to lose him,” said Dr. Gregory Holt, an assistant professor of medicine at the University of Miami who worked on the case this summer.

In the end, the doctors followed the directions of the tattoo but not before some hand-wringing and a quick referral to the hospital’s ethics team.

Doctors immediately had two questions about the tattoo.

“First, is it legal and second is it truly the man’s wishes,” Holt recalled Friday during a telephone interview with The Associated Press. He also helped write a case study that was published last week in The New England Journal of Medicine.

Typically when faced with ethical conundrums, doctors don’t want to choose an irreversible path. In this case, they tried to wake him, but he was in a delirious state and unable to respond.

Doctors had previously heard of cases of similar DNR tattoos. Some were just a joke. This one didn’t seem to be, Holt said. It was written on his chest with what appeared to be his signature tattooed underneath. The word “not” was underlined.

Still, doctors had questions. He came into the hospital without ID or family and they couldn’t reach next of kin, further complicating the matter.

“We did enough to keep him alive while we talked to ethics team,” said Holt, who said the patient was pumped with antibiotics and IV fluids, along with other measures.

Often in these cases, the patient has a piece of paper at home somewhere also stating their wish not to be resuscitated, but there wasn’t time to look.

The ethical team eventually ruled that the tattoo expressed his wishes and told doctors to follow his orders.

“He underlined the word ‘not’. He signed it. We think he probably had some medical knowledge. He placed it on his chest where someone would have to do chest compressions … so we felt like this was a real accurate statement reflecting his wishes,” Holt said.

The man’s status deteriorated throughout the night and he died without intervention.

The man’s written DNR request was later found at his home but doctors wrote in the case study that the tattoo “produced more confusion than clarity, given concerns about its legality and likely unfounded beliefs that tattoos might represent permanent reminders of regretted decisions made while the person was intoxicated.”