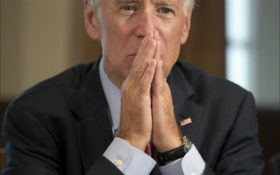 Joe Biden was humiliated in a South Carolina church on Sunday when he tried to take Holy Communion.

While campaigning over the weekend in the important Democratic primary state, Biden attended services at the Saint Anthony Catholic Church in Florence, S.C.

He was denied Holy Communion, though, because he’s pro-abortion.

Sponsored: O’Reilly reveals his most controversial project yet

“Holy Communion signifies we are one with God, each other and the Church. Our actions should reflect that,” he said. “Any public figure who advocates for abortion places himself or herself outside of Church teaching.”

In recent decades, Biden’s stance on abortion has swung to the left along with the Democratic party.

Biden has recently changed course on the Hyde Amendment, a ban on using federal funding for abortion services with the exception of rape, incest or life-saving procedures. He’d once supported it, according to NBC News.

But that’s all in the past.

As recently as June, after facing Democratic pressure to flip-flop, Biden said: “If I believe healthcare is a right, as I do, I can no longer support an amendment that makes that right dependent on someone’s zip code.”

Christian leaders just can’t accept that — however, Fr. Morey did mention that he would continue to pray for the former vice president.

“I will keep Mr. Biden in my prayers,” Morey said in the statement.