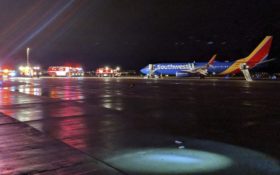 A Dallas-bound flight made an emergency landing at Albuquerque International Sunport, sending panicked passengers leaping from a wing onto the tarmac after crew members screamed at them to get away from the aircraft, passengers and officials said.

Southwest Flight 3562 took off from Phoenix on Sunday night and was headed for Dallas Love Field. About an hour later, the crew noticed an unusual smell in the cabin, the airline said in a statement.

Passengers said they could feel heat from the vents shortly before the crew said the plane was going to make an emergency landing. Passengers were told to brace as the plane landed.

Sponsored: Have you tasted THIS brownie?

“I sent a couple texts out to loved ones that you just don’t really want to have to send out,” Brandon Cox said.

“I hit the ground really hard and was just shell-shocked that I just had to jump off the wing of an airplane,” he said.

Video he posted on Twitter showed people using a slide connected to another emergency exit. A crewmember can be heard shouting, “Move away from the aircraft now!”

A flight to remember. Something I hope I never experience again. You see these things in movies and never expect it to happen to you! Most importantly everyone is safe but man what a scare! @CNN @NBCDFW @CBS @wfaa @PhilthaThrill pic.twitter.com/BvwAqqIOZC

Passenger David Fleck said he was surprised to discover there were no emergency slides near the exit door over the wing.

“It felt wrong when you’re up there. It was dark, cold and rainy,” he said. “It was disorienting. (You think), ‘Do I really just jump down?’”

The Albuquerque Fire Department tweeted that two people were taken to hospitals. The extent of their injuries was not immediately known.

A Dallas police officer aboard the flight tweeted that flight attendants “did a great job!”

Just made an emergency landing in Albuquerque. @SouthwestAir flight attendants did a great job!

Southwest said it worked to get passengers onboard another flight to Dallas, and aircraft will remain in Albuquerque where mechanics will inspect it.