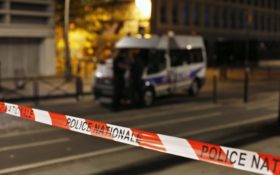 Seven people were injured in a knife attack in central Paris late Sunday by a foreign national.

Authorities were trying to determine if the attacker, who was arrested, is among the seven injured. Le Parisien said the attacker is an Afghan national.

An overnight police press officer said the attack took place near a cinema in the 19th district of Paris. The officer had no information about the identities of the injured. The Paris prosecutors’ office is handling the investigation.

The reports said the man was armed with a knife and a metal bar, and first attacked three people outside the cinema.