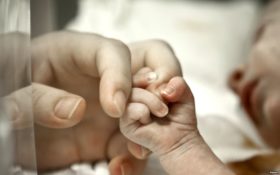 For one suburban New York family, Christmas Eve is turning into a tradition of very special deliveries.

Baby Elliott and older brother Oliver were delivered at Stony Brook University Hospital by Dr. Phil Schoenfeld. The doctor has worked Christmas Eve at the hospital for the past 17 years.

Jacki Grossman says she “couldn’t feel more blessed” than to have her boys share such a special day. She says, “It must have been meant to be.”

Oliver says he doesn’t mind sharing his birthday with his new brother. His mother says he ran around the hospital spreading the news.