Parents cashing in on nine-year-old’s murder!? - The Horn News 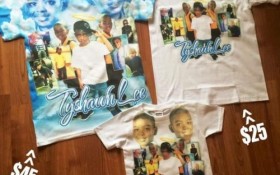 The parents of a nine-year-old Chicago boy who was lured into an alley and executed last week, allegedly because of his father’s gang connections, have reached out to the public for donations.

But there are already troubling questions about how the money is being used, and some donors are claiming they feel duped.

Fox 32 News, the network’s Chicago affiliate, reported that Tyshawn Lee’s mother, Karla Lee, raised more than $17,000 through a GoFundMe fundraising web page with the title, “Help me lay my baby to rest.”

But Lee admits she used at least some of the money that the public had contributed toward her son’s burial to purchase a car instead.

“Y’all don’t know nothing about me,” she told a local ABC 7 Chicago station. “For y’all to be bashing me like that, and I just lost my child.”

Lee said that another party stepped forward to pay for her son’s funeral and that Tyshawn would have wanted her to have safe transportation, especially as she drives to work through gang-infested neighborhoods.

While Lee has faced intense backlash for her decision, both through news outlets and social media, her actions seem to pale in comparison to those taken by Tyshawn Lee’s father.

Pierre Stokes, who allegedly also goes by the alias Wooh Gotti, is raising money by selling T-shirts for as much $45 in Tyshawn’s memory. According to Fox News, he also briefly set up a GoFundMe page himself asking for public donations.

Stokes’ reported gang affiliations are suspected as a cause of Tyshawn Lee’s death. Further, Chicago police have reported that the T-shirt-selling Stokes is refusing to cooperate with their investigation into who killed his son.