Under pressure, Israel refuses to open its borders to “terrorist” refugees - The Horn News 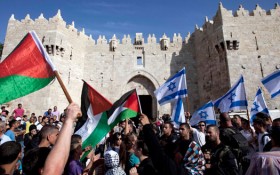 Palestine is demanding that Israel allow refugees caught in the Syrian conflict through their border.

Last week, the Palestinians turned to the United Nations to pressure Israel to allow up to 480,000 Palestinian refugees to travel to the West Bank and Gaza, then said Israel “has callously rejected this appeal.”

Israeli Prime Minister Benjamin Netanyahu said of the demands, “We will not allow Israel to be submerged by a wave of illegal migrants and terrorist activists.”

Netanyahu continued, “Israel is not indifferent to the human tragedy of Syrian and African refugees… but Israel is a small country — very small — without demographic or geographic depth. That is why we must control our borders.”

Palestine’s UN representative Riyad H. Mansour said at least 480,000 Palestinian refugees remain in Syria. Many are in the Yarmouk refugee camp on the outskirts of the Syrian capital Damascus. The Islamic State extremist group entered the camp in early April.