You paid for it! Army buying Chelsea Manning a sex change - The Horn News 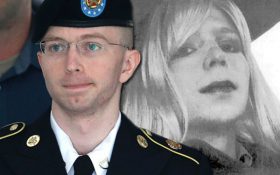 It seems these days, if you throw a hissy fit long enough, you can get anything you want — even if you’re a convicted traitor demanding over $100,000 for gender reassignment surgery.

Chelsea (formerly Bradley) Manning, a convicted transgender soldier imprisoned in Kansas for leaking classified information to the WikiLeaks website, will end a hunger strike after the Army agreed to pay for her transgender transition surgery, the American Civil Liberties Union announced Tuesday.

Manning’s medical treatment will begin with surgery that was demanded in April. Manning began the hunger strike at Fort Leavenworth military prison on Friday, vowing to continue until she received better treatment.

How much is this all costing you, the American taxpayer?

The Vera Institute of Justice estimates that the average cost of keeping an inmate in prison for one year is $31,286 per year. Meanwhile, the average cost of a male-to-female transition surgery is an eye-popping $140,450, according to the Philadelphia Transgender Surgery Center.

And Manning hopes she’s just the first prisoner to get the surgery on the taxpayer dime.

“I hope this sets a precedent for the thousands of trans people behind me hoping they will be given the treatment they need,” Manning said in a statement.

Manning, who was arrested in 2010 as Bradley Manning, was convicted in 2013 in military court of leaking more than 700,000 secret military and State Department documents to WikiLeaks. Manning was an intelligence analyst in Iraq at the time, and is serving a 35-year sentence.

“Thankfully the government has recognized its constitutional obligation to provide Chelsea with the medical care that she needs and we hope that they will act without delay to ensure that her suffering does not needlessly continue.”

Strangio said it’s troubling that Manning still faces administrative charges related to a suicide attempt on July 5 at the military prison. She wants the Army to drop those charges and stop efforts to have Manning to cut her hair to male hair length military standards.

The ACLU filed a lawsuit in 2014 against the U.S. Department of Defense over its refusal to give Manning the gender transition surgery she wanted.