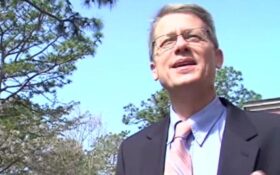 A defender of conservative principles in academia has passed away.

The details surrounding his death are still being investigated, authorities said.

The unfortunate passing was reported Thursday after a wellness check was conducted at his home by police.

Leading up to his untimely death, Adams was involved in complicated circumstances. Adams had fought with the University of North Carolina-Wilmington administration, where he was a sociology and criminology professor, over controversial tweets in which he compared the North Carolina COVID-19 lockdown to living in a slave state.

“This evening I ate pizza and drank beer with six guys at a six seat table top. I almost felt like a free man who was not living in the slave state of North Carolina,” he then tweeted in May, before referring to Gov. Roy Cooper as, “Massa Cooper.”

Adams, who was slated to retire Aug. 1, reached a settlement with the university after being released. The university paid Adams more than $500,000, according to Spectrum News 1.

Townhall writer Leak Barkoukis shared heartfelt words about her former colleague, writing about his courage as a vocal conservative.

” … he would want conservatives and Christians everywhere to continue carrying the torch,” she wrote.

“May God grant him rest and may his memory be eternal.”