Outrage! US troops told to ignore rape - The Horn News 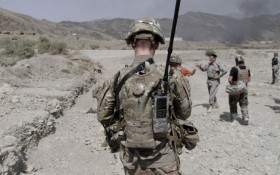 A leading member of the U.S. House of Representatives is demanding an investigation into charges that U.S. soldiers in Afghanistan were ordered to ignore Afghani soldiers sexually assaulting young boys.

It’s the latest development in a crisis that began after reports surfaced that a US sergeant is being forced out of the military for stopping an Afghani commander from raping a little boy. Several other soldiers have since come forward claiming it was US military policy to discourage soldiers from interfering in such vile sexual assaults.

The New York Times reported that Army Green Beret SFC Charles Martland and CAP Dan Quinn beat up an Afghan militia commander who was working with the Americans but also was discovered to have kept a boy chained to his bed as a sex slave.

Now, according to the Associated Press, Rep. Duncan Hunter, R-Calif. (himself a Marine Corps veteran), and others want a full investigation to officially determine whether military commanders ordered troops not to stop such sexual assaults and how high this scandal may go. Hunter said Martland must leave the Army by Nov. 1, because his intervention to stop a child rape triggered a negative mark on his service record.

Hunter is asking Defense Secretary Ash Carter to review the case, saying he has little confidence that the Army leaders will admit they made an error in deciding to punish Martland.

“I hope that when making a decision between supporting an elite warrior like Martland or a child rapist and criminal, the organizations or individuals in a position to make a decision will side with Martland,” Hunter said in a letter to Carter earlier this month.

Navy Capt. Jeff Davis, a Pentagon spokesman, says the U.S. has no policy directing forces to overlook human rights abuses. Davis told reporters on Monday that under the Obama administration’s lead, U.S. troops can report such incidents through their chain of command, but added that sexual assault of children, “while abhorrent, it’s fundamentally an Afghan law enforcement matter.”

The State Department, in its annual human rights report, has consistently said that sexual abuse of children remains pervasive in Afghanistan. And it documents the practice called “bacha bazi” — which means dancing boys. Bacha Bazi involves the sexual abuse of boys, often by powerful or wealthy local businessmen, who sexually abuse young boys trained to dance in female clothes.

In its 2014 report, the State Department said that many child sexual abusers are not arrested, and “there were reports security officials and those connected to the ANP (Afghan National Police) raped children with impunity.”

A number of U.S. House and Senate members have asked the Army about Martland’s case.

Rep. Vern Buchanan, R-Fla., sent a letter to Gen. Martin Dempsey, chairman of the Joint Chiefs of Staff, calling for the Pentagon to reverse what he said was its policy of ignoring sexual abuse of children in Afghanistan.

“It is bad enough if the Pentagon is telling our soldiers to ignore this type of barbaric and savage behavior, but it’s even worse if we are punishing those who try to stop it,” said Buchanan in the letter. “The only people who should be punished are the ones who created and condoned this immoral and savage code.”

According to Hunter and others familiar with the 2011 incident, Martland acted professionally. But Hunter said that a commanding general signed an order of reprimand against Martland saying his conduct during the incident was inexcusable and “demonstrates a flagrant departure from the integrity, professionalism and even-tempered leadership I expect from all soldiers of this command, especially a special forces professional.”

According to defense officials, an investigation into the incident resulted in what the Army calls an “adverse action” — essentially a black mark — on Martland’s personnel record. Under the Army review process, soldiers can be forced out if their performance doesn’t mean the standards for continued service.