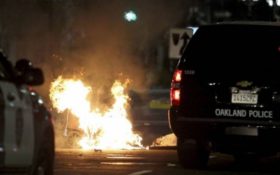 A day after President-elect Donald Trump was chosen by voters, angry protesters stormed the streets in over 25 cities nationwide, furious at the results of our democratic process.

Anti-Trump thugs beat and robbed a man they claimed was a Trump supporter, while elsewhere crowds smashed windows, lit fires, and held signs with messages declaring they reject the results of a free and fair election.

This isn’t the first time Soros’ organizations have been accused of funding unrest and rioting.

And one of his top funded organizations, MoveOn.org, is organizing citizens in Washington, D.C. and New York City, distributing signs and flags, disrupting traffic and declaring that they refused to accept Trump’s victory.

Whoever is behind the demonstrations, one thing is clear — the protests are well organized.

In Texas, a Twitter user noticed a line of buses near where protesters disrupted downtown Austin.

Anti-Trump protestors in Austin today are not as organic as they seem. Here are the busses they came in. #fakeprotests #trump2016 #austin pic.twitter.com/VxhP7t6OUI

Meanwhile, flames lit up the night sky in California cities Wednesday as thousands of protesters burned a giant Trump head in Los Angeles and started fires in Oakland intersections.

Late in the evening several hundred people blocked one of the city’s busiest freeways, U.S. 101 between downtown and Hollywood.

City News Service reported that 13 people were arrested as officers in full riot gear walked the protesters off the freeway.

In Chicago, where thousands had recently poured into the streets to celebrate the Chicago Cubs’ first World Series victory in over a century, several thousand people marched through the Loop. They gathered outside Trump Tower, chanting “Not my president!”

Chicago resident Michael Burke said he had a constitutional duty not to accept that outcome.

Police said that an estimated 1,800 to 2,000 people participated in the Chicago protests. Police reported five arrests, including two for obstructing traffic, but said there were no major incidents.

A similar protest in Manhattan drew about 1,000 people. Outside Trump Tower on Fifth Avenue in midtown, police installed barricades to keep the demonstrators at bay.

A protest that began at the Minnesota State Capitol Tuesday night with about 100 people swelled as it moved into downtown St. Paul, the Minneapolis Star Tribune reported. Protesters blocked downtown streets and traveled west on University Avenue where they shouted expletives about Trump in English and Spanish.

There were other Midwest protest marches in Omaha, Nebraska, and Kansas City, Missouri.

Dallas activists gathered by the dozens outside the city’s sports arena, the American Airlines Center.

In Oregon, dozens of people blocked traffic in downtown Portland, burned American flags, and forced a delay for trains on two light-rail lines.

Many held anti-Trump and Black Lives Matter signs and chanted slogans, including “Misogyny has to go,” and “The people united, will never be defeated.”

Trump ain't president 'til inauguration day lmao you guys still have time to assassinate BOTH Trump and Pence.

if trump gets assassinated then y'all are gonna have michael pence and he is possibly even worse. so u need to assassinate both of them

If trump wins he will be killed. Believe that. Someone will assassinate him. More chapters for the history books I guess