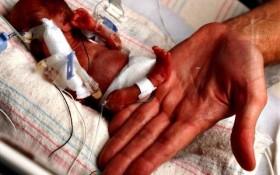 A Wisconsin law that requires abortion providers to get admitting privileges at nearby hospitals is unconstitutional, a federal appeals court panel ruled Monday.

The 7th U.S. Circuit Court of Appeals panel’s 2-1 decision doesn’t put the question to rest. Nearly a dozen states have imposed similar requirements on abortion providers, and the U.S. Supreme Court agreed last week to hear a challenge to Texas’ law in a case that could settle the issue nationally.

The Wisconsin case centers on a lawsuit filed by Planned Parenthood and Affiliated Medical Services. The groups argue that the 2013 law amounts to an unconstitutional restriction on abortion.

The law’s supporters counter the Republican-backed statutes would ensure continuity of care if a woman developed complications from an abortion and needed to be hospitalized. But the lawsuit said the statute would force AMS’s clinic in Milwaukee to close because its doctors couldn’t get admitting privileges. That in turn would lead to longer waits at Planned Parenthood clinics. Therefore, the lawsuit maintained, the law amounts to an illegal restriction on abortions.

Writing for the 7th Circuit majority, Judge Richard Posner called the contention that the law would protect women’s health “nonexistent.” He said the law would put more women in danger by increasing the waiting times for abortions, which could push some procedures into the second trimester.

“What makes no sense is to abridge the constitutional right to abortion on the basis of spurious contentions regarding women’s health — and the abridgement challenged in this case would actually endanger women’s health,” he wrote.

“The solution to the plaintiffs’ problems is that they find more qualified doctors, not that the state relax — or that we strike down as unconstitutional — precautions taken by the state to protect the health and safety of pregnant women who have chosen to end their pregnancies,” Manion wrote.

Anne E. Schwartz, a spokeswoman for the Wisconsin Department of Justice, which defended Wisconsin’s law, said the U.S. Supreme Court will ultimately decide the issue.