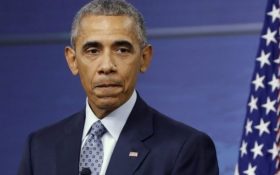 America’s finest athletes trained for years, braved exposure to the Zika virus, and traveled halfway across the hemisphere to compete for national glory and personal honor in the Olympics.

They arrived only to face a direct insult waiting for them from President Barack Obama.

Instead of applauding American athletes’ triumph’s in Rio, Obama is taking his family on another two-week vacation to Martha’s Vineyard at taxpayer expense.

And adding insult to injury, in his place Obama sent an accused Communist spy who once led a group demanding amnesty for illegal immigrants.

In other words, he’s using the Olympics to push for open borders.

Aponte’s history as a possible Cuban intelligence asset came to light when former President Bill Clinton tried to name Aponte as U.S. ambassador to the Dominican Republic in the 1990s. U.S. agents revealed that her live-in boyfriend, Roberto Tamayo, reportedly worked as an intelligence officer for Castro’s Cuba and tried to recruit Aponte to follow his lead.

Tamayo loaned Aponte money that came from Cuba in an attempt to get her to betray her country, although a Senate report said it was “unclear” how seriously Havana pursued her.

We won’t find out from Aponte. She refused to take a lie detector test over the allegations in 1994, and Clinton eventually withdrew her nomination.

Ironically, one member of the U.S. Olympic team – Danell Leyva, who competes in gymnastics – came to America when his parents defected from Communist Cuba. You have to wonder what he thinks when he sees the officials Obama sent to “support” him.

Instead of answering questions about her ties to Castro’s Cuba, Aponte joined the board of two political groups pushing for Open Borders, the National Council of La Raza and the Puerto Rican Legal Defense and Education Fund.

La Raza has demanded U.S. citizenship for millions of illegal aliens, an end to all deportations, and that states give illegals in-state tuition fees and drivers licenses.

Is sending Aponte to represent our country Obama’s way of telling the world that the U.S. border is open for business?

For a president to skip an Olympic event is unusual in itself. President Ronald Reagan was the first president to support an Olympic team in person, when he came to the 1984 Olympic games in Los Angeles. Bill Clinton attended the 1996 games in Atlanta.

President George W. Bush broke the mold, traveling the world to support U.S. Olympic competitors. Not only did he open the 2002 Winter Olympics in Salt Lake City, but he was the first president to travel overseas to Athens and Beijing in 2008. At the 2006 Winter Olympics, Bush sent his wife, Laura Bush, in his place.

But his Communist appointments and drive to give illegal aliens amnesty may cost the country much, much more.