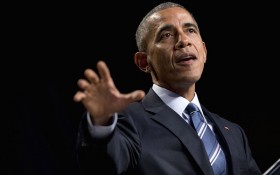 She was fired for letting veterans die while waiting for the care our government promised them — and is accused of accepting kickbacks in exchange for special treatment.

Now, she says it was unfair and she is demanding her job back — and President Barack Obama’s administration is helping her get it.

Obama’s Justice Department is siding with a legal argument by a fired Department of Veterans Affairs official at the center of a nationwide scandal over long wait times for veterans seeking medical care and secret lists covering up the delays.

Sharon Helman, the former director of the Phoenix VA Health Care System, is suing the VA to win back her old job. Helman argues in court papers that a key portion of a 2014 law passed in response to the wait-time scandal is unconstitutional and denies her an important step to appeal her firing.

Attorney General Loretta Lynch said in a letter to Congress that the Justice Department has decided not to contest that element of Helman’s challenge, essentially agreeing with her legal position.

Helman is serving two years’ probation for failing to disclose more than $19,000 in gifts she received while supervising the Phoenix hospital where whistleblowers revealed veterans on secret waiting lists faced scheduling delays of up to a year. As many as 40 veterans died while awaiting care at the hospital, according to an investigation by the VA’s office of inspector general.

McCarthy and other Republicans reacted with outrage, saying the attorney general’s failure to defend the 2014 law could make it easier for Helman — a convicted felon — to get back her job.

“When Congress passed the Veterans Choice Act, a key provision allowed for incompetent and indifferent executives whose inaction allowed veterans to die to be more easily fired,” McCarthy said in a statement. “Now, even after the president signed this provision into law, his administration is refusing to defend this measure of accountability. This decision by the Obama administration puts our veterans at further risk. ”

The effect of Lynch’s action is clear, said Miller, R-Fla.: “It undermines very modest reforms to our broken civil service system supported in 2014 by the president and an overwhelming majority of Congress.”

Helman was fired in November 2014, seven months after the wait-time scandal came to light. The scandal led to the ouster of former VA Secretary Eric Shinseki and a $16 billion law overhauling the labyrinthine veterans’ health care system and making it easier to fire VA employees accused of wrongdoing.

The inspector general found that workers at the Phoenix VA hospital falsified waiting lists while their supervisors looked the other way or even directed it, resulting in chronic delays for veterans seeking care.

Similar problems were soon discovered nationwide. Intentional misconduct was substantiated in 51 of 77 completed investigations into scheduling problems and wait-time manipulation, the inspector general’s office said in a February report.

Problems at the VA have affected tens of thousands of veterans and prompted an outcry in Congress that continues as lawmakers and agency leaders struggle over how to improve the agency.

Sen. John McCain, R-Ariz., called the attorney general’s decision in the Helman case “shameful” and said it contradicts a statement Obama made when he signed the VA reform law in August 2014.

“If you engage in an unethical practice, if you cover up a serious problem, you should be fired. Period,” Obama said at a signing ceremony at a Virginia military base.

Lynch’s decision “not only undermines the law that Congress passed and the president supported, but it sends a clear message that for President Obama and Attorney General Lynch, the sanctity of a federal bureaucrat’s job is far more important than the health and well-being of our veterans,” McCain said.