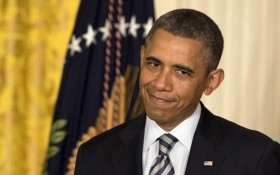 In a move that has critics up in arms, President Barack Obama commuted the prison sentences of 61 drug offenders on Wednesday —  including more than a third who were serving life sentences.

Obama, who was too busy to attend the funerals of Supreme Court Justice Antonin Scalia, former First Lady Nancy Reagan, and military hero Chris Kyle, also found time in his schedule to meet for lunch with several freed felons to talk about how they were re-entering society.

All of the inmates who had their sentences commuted yesterday are serving time for drug possession, intent to sell or related crimes, and include some who were also charged with firearms violations. Obama’s commutation wipes out their sentences, with most of the inmates set to be released on July 28.

One of the inmates, Jesse Webster of Chicago, is serving a life term for intent to sell cocaine and filing false tax returns. Another, Byron McDade of Bowie, Maryland, got 27 years for cocaine-related charges as well.

Nabar Criam of Brooklyn, New York, was sentenced to 15 years for possession of crack cocaine with intent to distribute, but received an additional charge for having a gun on hand during his drug trafficking crime.

The latest tranche of commutations brings to 248 the total number of inmates whose sentences Obama has commuted — more than the past six presidents combined.

The pace of commutations and the rarer use of pardons are expected to increase as the end of Obama’s presidency nears.

“Throughout the remainder of his time in office, the president is committed to continuing to issue more grants of clemency as well as to strengthening rehabilitation programs,” said Neil Eggleston, the White House counsel, in a blog post.