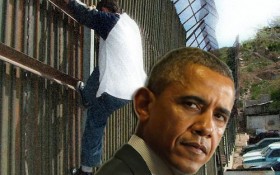 President Barack Obama’s administration has been regularly criticized over security issues related the the United States border with Mexico.

So it’s no surprise that Department of Homeland Security Deputy Secretary Alejandro Mayorkas’ statement that “the border is more secure now than it has been in many, many years,” has left many of the Obama administration’s opponents up-in-arms.

In fact, some critics are saying it’s a blatant lie. As an example, they cite that The State Department has known for years that Mexican drug cartels have profited from smuggling Islamic terrorists into the United States.

According to Judicial Watch report in January, “For more than a decade the U.S. government has known that ‘Arab extremists’ are entering the country through Mexico with the assistance of smuggling network ‘cells,’ according to State Department documents obtained by Judicial Watch that reveal among them was a top Al Qaeda operative wanted by the FBI.”

The Border Patrol has long complained that the Obama administration’s tactics have worsened the situation. On Monday, The Horn News reported that the president of the National Border Patrol Council, Brandon Judd, said Obama’s policy have created “an open border with Mexico.”

“Though the situation has only worsened, the administration continues to repeat the same lies even though a number of reports have confirmed that Islamic terrorists have entered the U.S. through the famously porous southern border and tens of thousands of Unaccompanied Alien Children (UAC) keep crossing in without ever encountering federal agents before touching American soil,” political watchdog Judicial Watch responded to Mayorkas’ remarks.

Speaking about border security, Mayorkas also apparently attempted to justify the porous border that allows thousands of illegal immigrants to easily sneak into the country by saing the United States is a “welcoming, embracing nation that does not operate in isolation.”

Welcoming and embracing, yes — when it comes to legal immigrants, there is no one more welcoming than Americans.

But concerned citizens are not welcoming of known criminals, drug smugglers, and Islamic terrorists hell bent on sneaking onto U.S. soil.