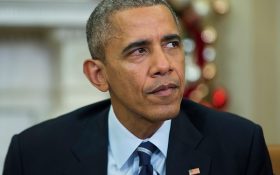 It’s the most fitting example of the buffoonery and wastefulness that plagues President Barack Obama’s legacy.

One of the Obama administration’s senior military aides, who served directly under Obama appointee Defense Secretary Ash Carter, was caught billing taxpayers for multiple trips to strip clubs or gentlemen’s clubs around the world, where he drank in excess and had “improper interactions” with women during business travel with Carter, according to a report released Thursday by the Defense Department inspector general.

Under other presidents, this would be a major scandal.

Under Obama, however, this kind of disorder and corruption is business as usual.

The 50-page report describes in detail two strip clubs or show clubs where the aide, Maj. Gen. Ron Lewis, spent more than $1,000 on champagne and drinks. It includes conflicting statements that Lewis made to investigators explaining the outings, and on several occasions quotes his acknowledgement that he was drunk or drank to “more than moderation.”

Lewis submitted a written rebuttal slamming the investigation and claiming he was railroaded, saying the IG assembled an inaccurate and inflammatory case based on innuendo and had failed to “find the truth.”

The inspector general’s report says Lewis improperly used his credit card, lied to a bank to get charges removed and said he was guilty of conduct unbecoming an officer, a violation of the code of military justice.

The report also details several inappropriate interactions Lewis had with women, including one late-night incident in his hotel room when he was drinking with a female enlisted service member who later told investigators he tried to kiss her. According to the report, a female Defense Department staff member who saw Lewis and the woman alone in the room, told him, “Sir, respectfully, you’re being really stupid. Don’t do this. She needs to come and stay in my room.”

The report will go to Army leaders who will determine what, if any, punishment is required and at what rank Lewis would be able to retire.

Lewis took responsibility for several inappropriate actions, including charging nearly $1,800 on his government credit card at what he called a “dance club” in Rome. In an embarrassing set of circumstances, Lewis said, he tried to use his personal debit card at the club, but it didn’t work, so he had to walk back to his hotel with a female employee of the club, and wake up a Defense Department staff member to get his government card to pay the bill. He said he paid back the charges when he returned to the U.S.

The report identified the club as Cica Cica Boom, a club whose sign advertises lap dances, but Lewis said that’s not the club he went to. He said he went to “Verafollia Srl” a “high-end establishment with a respectable clientele that had a DJ, a bar area and a dance floor where couples were dancing.”

Investigators, including local law enforcement, visited the club and provided photos showing stripper poles and a “lap dance chair.” The report said the club manager said the name “Verafollia Srl” is used on credit card receipts “to conceal any link to the Cica Cica Boom club for patrons who frequent the establishment.”

Lewis, in the report, explained the high prices charged to his credit card by saying he ordered “two or three bottles of champagne, lots of drinks.”

Lewis had shot up the promotional ladder wiht Obama, and his job with Carter stemmed from their close professional relationship. He had served as an aide to Carter when Carter was deputy defense secretary.

In Korea, the report said, Lewis went to a gentleman’s club called the Candy Bar. Lewis denied going there as well, but acknowledged being in a commercial area of Seoul. He said that when he returned to Washington and saw two charges on his credit card totally about $1,100, he called the bank to have them removed, and the bank agreed.

Investigators presented him with two receipts from the club bearing the name “Candy.” Both receipts show only a short pen mark in the signature area, and do not show his written name.

The report says investigators, after getting Lewis’ rebuttal, went back to check their information, and said they stand by their findings. It adds that a representative from the Candy Bar club told an investigator that she recognized Lewis, but could not recall any details.

The report portrays Lewis as a senior officer who often went out alone on overseas trips, and who sometimes drank to excess. It said his behavior concerned some staff members and at times was a topic of conversation.