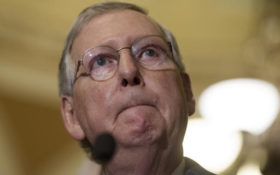 A group of liberal protesters waited outside an event in Georgetown on Monday night to confront Senate Majority Leader Mitch McConnell… but they did not get the response they were expecting.

McConnell’s wife, Transportation Secretary Elaine Chao, took on the angry protesters head on. She approached them and shouted, “Why don’t you leave my husband alone!?”

As McConnell and Chao were leaving a dinner at Georgetown University on Monday night with business executives, protesters played audio of crying children who had been separated from their families at the border.

A group of protesters confronts Mitch McConnell and Elaine Chao with @ProPublica’s audio of children separated from their families at the border while leaving a @Georgetown event. pic.twitter.com/jRKHKBeFpC

Chao can be heard shouting back at the nasty protesters and standing up for her husband.

“He’s not,” she responded, likely in reference to separating families. Chao later says, “You leave him alone!”

The hecklers continued screaming, “How does he sleep at night?” as security guards are seen pushing them back.

This incident comes just days after a number of Trump officials have been confronted by angry protesters at restaurants.

Last week, protesters chanted angry slogans at Security Secretary Kirstjen Nielson while she was leaving a restaurant. In another incident, White House senior adviser Stephen Miller was called a “fascist” while dining at another restaurant.

All of these recent incidents have brought into question the debate over civility and protest. Agree with them or not, these Trump administration officials are humans just like everyone else. They have rights, and should not be concerned about their safety when dining out with their families.

This is not unfortunately not the first incident of the out-of-control “alt left” — and it certainly will not be the last.