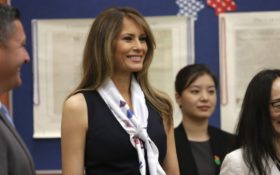 First Lady Melania Trump spent time with victims of domestic abuse on Friday, a charitable act that was almost entirely ignored by the mainstream media.

Is it because liberals used the first lady’s charity work as an excuse to attack her?

Today we were excited to have @FLOTUS visit our girls group home in Lake Worth.Thank you for taking the time to listen & talk with the girls pic.twitter.com/v0OqECxqDa

“This is a day that the girls will never forget,” Matthew Ladika, the chief executive officer of HomeSafe told The Post.

Melania reportedly arrived with gifts for the girls and Easter baskets and stuffed bunnies for the other residents at HomeSafe, which include 40 boys and 7 girls.

I had a wonderful time visiting @HomeSafeFla today! The young ladies I spoke with hold so much promise for the future. pic.twitter.com/3W5i2Xpo5m

But instead of recognizing the beautiful act by our first lady and taking the chance to draw awareness to the issue of domestic violence, the media was silent.

Only one bizarre site recognized her charitable action… and focused on the cost of Melania’s shoes, not the value of her visit.

According to The Blaze, the site sarcastically lashed out at Melania, saying, “No doubt the children will weigh heavily on her mind on Easter as she enjoys a holiday meal and restful time amid the terra-cotta-roofed Mar-a-Lago, which boasts sweeping oceanfront views nearly 11 miles away”

“The news website’s implication, of course, is that Trump’s visit to the group home was shallow because she lives a life of luxury. Just one question though: Would they have said the same thing about Michelle Obama?” The Blaze asked.

In a January 2017 article, the site published an article titled, “19 Times Michelle Obama Rocked a Casual Look,” — and didn’t once mention the price tag of her footwear.

While she’s recognized for wearing designer shoes like Jimmy Choo and Fendi, presumably with hefty retail values, Michelle Obama isn’t criticized, but instead referred to as “effortlessly cool.”

Just another example of the insane bias of the media, which prefers to paint the Trump family as wealthy and out-of-touch, even when they are real and undeniably good.