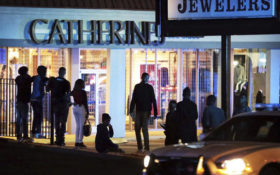 As the holiday season is winding down, there is one out-of-hand and violent Christmas tradition that the mainstream media is covering up.

Young, African-American teens are heading to malls across the country with one goal in mind: creating chaos.

For the past four years on December 26th, thousands of young people — almost entirely African-American — have descended on shopping centers across the country and unleashed violence so shocking many malls are forced to evacuate customers during one of the busiest shopping days of the year.

And the mainstream media is ignoring the trend, because it’s no politically correct to talk about.

It’s because the story involves an uncomfortable conversation involving racial relations in the United States.

But that doesn’t mean it should go unreported.

The mainstream media has acknowledged only the violence, while ignoring the clear pattern of the mobs has been overlooked for years.

The active rioters are described as “teens” and “youths”, with complete disregard to the obvious connection between the groups and the dates.

Their article titled, “America’s Newest Christmas Tradition: Black Mob Violence at Malls” was published on December 28th, 2015, where they compared the 2015 outbreak of post-Christmas violence by mobs of young African-Americans across the country to what happened for two years before.

Here we are exactly one year later, and dozens of reports of the exact same violence are surfacing across the nation.

Police evacuated a suburban Denver mall Monday after hundreds of young people converged on the site, with several fights breaking out, authorities said.

Police said they suspect that postings on social media drew people to the site.

Authorities shut down the mall as dozens of police converged on the scene and worked to restore order.

Below is a video of a brawl that broke out at Jersey Gardens mall:

In Memphis, Tennessee, police arrested several people following fights at two malls there. No one was injured and no gunshots were fired, despite reports indicating otherwise. There was no official word on whether any of the fights, which were also reported in  Arizona, Texas, Indiana, Connecticut and more, were connected. There seemed to be a coordinated effort to spread rumors of gunfire, though.

Lockdown and reports of shooting at Arizona Mills appear to be part of a hoax at malls nationwide pic.twitter.com/nPYhwveKey

Police in Ohio told Cleveland.com that officers used pepper spray to disperse a large crowd following a fight at an upscale shopping mall in Beachwood, just outside of Cleveland.

In Aurora, Illinois, outside of Chicago, a mall there was temporarily shut down due to a large disturbance. Videos posted on Twitter showed mall security trying to get the situation under control.

There were similar violent disturbances at a total of 15 malls around the country, according to police reports and social media accounts.

And the mainstream media is ignoring it.

Editors note: Tensions can run high regarding race relations in America, especially after reading stories like these. The Horn News encourages respectful discourse from our readers below, but we will not tolerate hate speech from either side in the comment section.