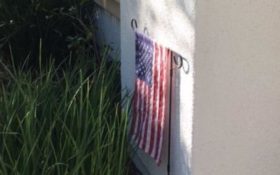 Crazy liberals are at it again, and this time they are attacking a Blue Star Marine family.

Heather Valenti moved to Oceanside, California with her husband, a U.S. Marine, in April after he was transferred to Camp Pendleton in Southern California. He was then deployed overseas, and in support of his service she displayed a small American flag outside her home.

What happened next is truly disgusting.

Valenti was contacted by her Homeowners Association, who demanded she take down the American flag, Fox5 San Diego reported.

The HOA is demanding a woman – whose husband is fighting for their freedom – to silence her display of public support for him.

And it gets even worse.

Valenti claims that other members of her neighborhood have displayed non-U.S. flags and signs in similar locations, with no threat of punishment from the HOA.

“I just feel like I’m being targeted,” she told local station Fox 5. “There are other people in the community that have other things up in the same exact spot and I haven’t seen them taken down; no consequences with that.”

For example, there is a flag with a pineapple on it in her neighborhood that has been no problem for the HOA.

Apparently, they are only offended by Old Glory.

Valenti’s husband is putting his life on the line, and his wife doesn’t even have the freedom to fly a small flag in his honor?

It’s another example of a senseless attack by liberals on American pride.

Comment below with “Fly the flag!” if you support the U.S. Marine’s wife’s right to fly Old Glory!