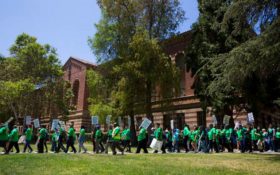 Thousands of custodians, security guards, gardeners and other service workers at the University of California campuses have started a three-day walkout to demand higher wages and more liberal policies at the colleges — and they’re doing so at the expense of cancer patients.

Strikers gathered at sunrise Monday on the 10 campuses throughout the state, wearing green t-shirts and carrying signs that call for “equality, fairness, respect.”

The service workers are being joined by medical center staff, who have created a massive disruption at the university hospitals by canceling hundreds of surgeries and medical exams for patients in desperate need.

The strike was called by AFSCME Local 3299, which represents 25,000 workers, after the union refused the university terms for a new contract and mediation efforts failed.

On Tuesday, almost 30,000 nurses, pharmacists, radiologists, and other medical workers will join the service workers in a sympathy strike.

Medical center officials said they would continue to deliver emergency patient care services but last week rescheduled hundreds of other appointments in anticipation of the walkouts.

These weren’t just any appointments, though. Medical officials canceled patients’ surgeries, cancer exams, and radiology exams — all so they could sympathize with service workers that refused the pay hike they were offered.

According to AFSCME spokesman John de los Angeles, the union wants the universities to address what they call an income, racial, and gender gap for workers.

“They are actively seeking to hire contract workers in favor of directly employed workers simply because they are cheaper and that is driving inequality,” de los Angeles said.

“A disruptive demonstration will change neither UC’s economic situation nor the university’s position on AFSCME’s unreasonable demands,” Doan said about the strike.

Doan assured students and patients that they will work hard to make sure they receive services. But a patient waiting for their cancer screening exam may not have time to sit around until these medical officials decide to get back to their day jobs.

A true medical official would sympathize more for their patient than an overpaid service worker demanding more than a 20 percent raise.