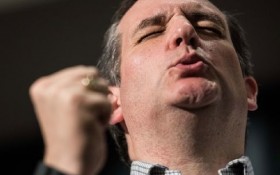 Republican presidential candidate Donald Trump and his supporters are up-in-arms after the GOP announced it was changing up the delegates awarded in Colorado and assigning all of them to Texas Sen. Ted Cruz — a move critics say effectively denied citizens across the Rocky Mountain State their right to vote.

How is it possible that the people of the great State of Colorado never got to vote in the Republican Primary? Great anger – totally unfair!

The people of Colorado had their vote taken away from them by the phony politicians. Biggest story in politics. This will not be allowed!

Trump is also blasting the way the country chooses presidential party nominees as “corrupt” and “crooked” as he grapples with the potential of a contested convention that he risks losing.

To grab up all the delegates in the state, Cruz took advantage of an unusual change to Colorado’s nominating process.

Rather than selecting delegates according to a statewide vote, as it has in the past, Colorado held a series of rolling caucuses this week in each of its seven congressional districts, which culminated in a statewide convention on Saturday.

More than 3,000 people attended the convention to pick the remaining 13 delegates. Cruz supporters sported bright orange T-shirts with his slate of delegates printed on the back.

Trump’s organizers distributed a slate that listed incorrect information for four of his candidates. His campaign contended the errors were due to changes to the ballot by the state GOP and did not rule out challenging the results.

The complex Colorado process inherently favored Cruz, the Trump campaign charged, and suspicions among supporters mounted after the results were announced Saturday night. The official Colorado Republican Party account tweeted: “We did it! #NeverTrump.” Colorado GOP spokesman Kyle Kohli said the tweet was unauthorized and it was swiftly deleted. The party was investigating who wrote the tweet.

Cruz supporters argued that their candidate didn’t just have an organizational edge but that the Texas senator was a better fit with the state’s socially conservative, libertarian-minded Republicans. “The Donald Trump caustic politics just doesn’t resonate in Colorado,” said Tom Peterson, an engineer and delegate from rural Elbert County.

Trump supporters were frustrated by Colorado’s arcane process, which involved a series of caucuses at different locations before the convention. “It doesn’t seem like a real fair system,” said George Rosel, 60, an engineer and Trump supporter who came to the convention from the Denver suburb of Highlands Ranch. “It seems kind of rigged.”

Of the 34 delegates Cruz won, only 30 are technically pledged to his campaign; four are party officials who are unpledged but have promised to support Cruz, and the campaign placed them on its slate.

Speaking to thousands packed in a frigid airport hangar in western New York on Sunday, Trump ripped the byzantine fight over delegates at the heart of his party’s nominating process. He argued anew that the person who wins the most votes in the primary process should automatically be the GOP nominee.

“What they’re trying to do is subvert the movement with crooked shenanigans,” said Trump, comparing his woes to those of Bernie Sanders, who is winning states but still far behind Democratic front-runner Hillary Clinton in the race for delegates that decide party nominations.

“We should have won it a long time ago,” Trump said. “But, you know, we keep losing where we’re winning.”

Trump was coming to terms with the political reality of candidates chasing delegates ahead of their nominating convention, and now he’s shifting his focus to developing a strategy akin to the one rival Cruz has been pursuing for months.

“A more traditional approach is needed and Donald Trump recognizes that,” Paul Manafort, Trump’s new delegate chief, said Sunday on NBC’s “Meet the Press.” At his rally in Rochester, Trump repeatedly insisted his campaign was “doing fine” and predicted he would clinch the nomination before the summer convention.

Nonetheless, his supporters described with disdain what they saw as an effort by the party’s establishment to deny Trump a victory they feel he has already earned.

“I’m 59 years old and maybe I’ve had my head in the sand through the years, but I’ve never seen anything like this,” said Cheryl Griggs of Hilton, New York, who attended the rally with her son. “To go against the votes of the people and the will of the people and put somebody else in there, I think, is horrific.”

She said she didn’t understand the delegate process and believes that the winner should be decided by popular vote.

Rochester’s Scott Nasca said he worries the efforts would only leave Trump bruised heading into a general election.

“It’s absolutely ridiculous. But he’s a threat to the big people in politics, the lobbyists, the elitists in the Republican Party,” he added. “They’re going to disenfranchise their own voters.”

His brother-in-law Mark Tachin, 50, a mason contractor in Rochester, was equally glum.

“It’s like the American people don’t have a voice anymore, it almost feels like that,” he said. “As much as people are voting right now in these huge turnouts that Trump is getting, they’re still not paying attention to these turnouts. They’re still trying to do their own thing despite the voice of the people. It’s just unbelievable to me.”

Trump was introduced at the rally by Buffalo real estate developer and 2010 gubernatorial candidate Carl Paladino, who said that talk of a brokered convention “suggests that they can take that right away from the American people to choose their leader.”

Elsewhere, Trump continued to try to catch up to Cruz’s ground operation, which is months ahead in some states when it comes to securing friendly delegates. Cruz is trying to eat into Trump’s home-state support in conservative pockets of New York.

Manafort said the Cruz campaign was using a “scorched earth” approach in which “they don’t care about the party. If they don’t get what they want, they blow it up.”

“The key, especially for uncommitted delegates, is the electability question,” Manafort said on NBC.

Trump still has a narrow path to nailing down the Republican nomination by the end of the primaries on June 7, but he has little room for error. He would need to win nearly 60 percent of all the remaining delegates to clinch the nomination before the convention. So far, he’s winning about 45 percent.