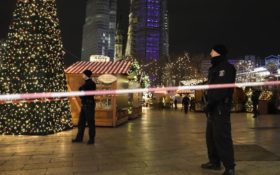 CNN’s official response to the Berlin Christmas massacre, where a blood-crazed Islamic terrorist plowed a truck into a crowd of innocent people at a Christmas celebration, was a strong condemnation of Islamic extremism and the violent murderers being imported into Western Europe.

No, just kidding — they published an editorial blaming conservatives and Christians for the attack, saying the right’s policies are to blame for provoking Islamic terror.

This is how insane the mainstream media gotten.

The “ultimate danger of terror attacks” isn’t a blood-crazed Islamic extremist running crushing the skulls of dozens of innocent women and children under his truck tires, according to the CNN editorial written by David Andleman.

No, instead the real danger is that voters might ask that terrorists be kept out in the future.

“Each successive, successful and bloody terrorist attack will further whet the appetite of right-wing politicians and their supporters, feverish to return full control over their nation’s security to their own security forces,” Andleman says.

“This is the ultimate danger of terror attacks. Reasonable men and women must recognize them for what they are — an effort to drain what is left of democracy from our nations. As President-elect Donald Trump begins to focus on how to respond, he should understand that support for moderation and unity will defeat those who prefer to divide each of us. A populist agenda, in contrast, will only strengthen and embolden our enemies.”

Violence is peace. Peace is violence.

And we’re not buying it.

If anyone is to blame for this tragedy besides the Islamic terrorist behind the wheel, it’s the morons that let him in the country.