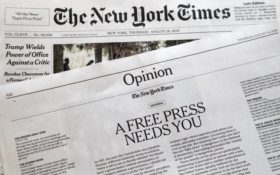 Nearly 350 newspapers, from Maine to Hawaii, colluded to attack President Donald Trump regarding “fake news” claims on Thursday. The papers released a coordinated series of scathing editorials in defense of the mainstream media — and Trump didn’t take it silently.

The campaign was set in motion by an editor at The Boston Globe, which argued in its own editorial that Trump’s label of the media as the enemy of the people “is as un-American as it is dangerous to the civic compact we have shared for more than two centuries.”

Trump denounced the effort on Twitter, saying The Globe’s stunt simply proves his claim that the media is biased against him.

There is nothing that I would want more for our Country than true FREEDOM OF THE PRESS. The fact is that the Press is FREE to write and say anything it wants, but much of what it says is FAKE NEWS, pushing a political agenda or just plain trying to hurt people. HONESTY WINS!

Marjorie Pritchard, the editor who came up with the anti-Trump campaign, said earlier in the week that some 350 news organizations indicated they would participate. However, there was some significant blowback from newspapers that wrote to say they would not participate.

Some newspapers, including The Wall Street Journal, The San Francisco Chronicle, The Times-Picayune in New Orleans, The Rome (N.Y.), Daily Sentinel and The Richmond Times-Dispatch (V.A.), contained editorials or columns explaining why they weren’t joining the Globe’s effort.

“We prize our independence, both from government and from other media outlets,” The New York Daily News wrote. “Coordination, especially with Boston, isn’t in our nature.”

There was also some scolding of the press — from the press — for letting distaste for Trump show up where it shouldn’t in news stories.

“Just as his lack of restraint has often been the president’s self-inflicted wound, the bias of some of the press has hurt journalism, at the very moment when it is most needed to save itself,” said The Pittsburgh Post-Gazette. “It is time for a truce.”

Polls show Republicans have grown more negative toward the news media in recent years: Pew Research Center said 85 percent of Republicans and Republican-leaning independents said in June 2017 that the news media has a negative effect on the country, up from 68 percent in 2010.

These critics say Friday’s anti-Trump stunt by nearly 350 news outlets is smoking gun proof that the media is biased against the president.

When is the “fake news” going to wake up to the damage their rhetoric is causing this country — and their own professional integrity?