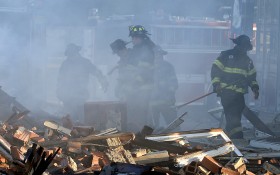 Someone has been setting fire to Christian churches in the St. Louis area.

Police are looking for suspects, and St. Louis Fire Capt. Garon Mosby would not rule out the possibility of a hate crime directed either at churches or at African-Americans.

Since Oct. 8, fire has damaged six churches, all within a few miles of each other in north St. Louis city and county. In each case, the front doors were set on fire. Damage has ranged from a few hundred dollars at one church to the near destruction of another.

Five of the burned churches are predominantly black and one is racially mixed.

The fires add to racial angst in an area still reeling from a police shooting and unrest in Ferguson last year.

The U.S. Bureau of Alcohol, Tobacco, Firearms and Explosives is helping with the investigation.