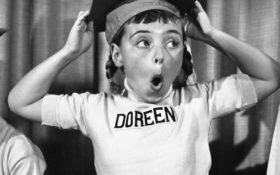 Doreen Tracey, a former child star who played one of the original cute-as-a-button Mouseketeers on “The Mickey Mouse Club” in the 1950s, has died, according to Disney publicist Howard Green. She was 74.

Tracey died from pneumonia Wednesday at a hospital in Thousand Oaks, California, following a two-year battle with cancer.

Tracey maintained ties to Disney and show business throughout her life, appearing in the film “Westward Ho the Wagons!” and touring with the Mouseketeers. She later served as a publicist to musician Frank Zappa and worked at Warner Bros.

Sponsored: I have to warn you before you watch this…

It was the pig-tailed Tracey and her talented co-stars — including Annette Funicello — who appeared on television in black hats with ears following the anthem “M-I-C, K-E-Y, M-O-U-S-E …” on ABC’s “The Mickey Mouse Club.” Millions of kids raced home from school to watch in wonder as the bouncy Mouseketeers announced themselves at the top of the show.

“The Mickey Mouse Club” was the brainchild of Walt Disney during the flowering of his company’s fortunes in the mid-1950s. To help finance the Disneyland park, he agreed to supply ABC with TV shows. One was designed for children in the pre-dinner hour.

The hour-long show proved a sensation with its Oct. 3, 1955, debut. It flourished for two seasons, then was reduced to a half-hour for two more. Tracey stayed for its four-year run.

The black-and-white series was syndicated in 1962-65. The 1990s version of “The Mickey Mouse Club” launched the careers of singers Justin Timberlake, Britney Spears and Christina Aguilera, and actors Keri Russell and Ryan Gosling.

Born in London on April 3, 1943, to parents who worked in vaudeville, Tracey arrived in the United States when she was 4 and learned to sing and dance. She nabbed a spot on “The Mickey Mouse Club” when she was 12.

Tracey strained her relationship with Disney by posing for a men’s magazine in 1976 with nothing on except her mouse ears and later wearing nothing but an open trench coat in front of Disney Studios. Still, she often appeared at Mickey Mouse Club reunion shows at Disneyland and at Disney conventions, last celebrating the show’s 60th anniversary in 2015.

Tracey is survived by her son, Bradley, and two grandchildren, Gavin, 9, and Autumn, 12.