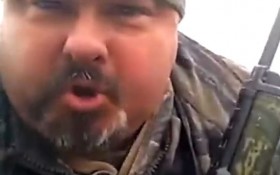 Three more suspects linked to the armed occupation of a federal wildlife refuge in Oregon surrendered Wednesday, hours after their jailed leader urged the handful of remaining militants to abandon the site they have occupied for more than three weeks.

In response, at least one militiaman is calling for supporters and previous military members to come and join the impending “bloodbath,” and to kill any police that try and stop them.

After militant leader Ammon Bundy made his first court appearance in Portland on Wednesday, his attorney, Mike Arnold, called for calm and read this statement from his client: “Please stand down. Go home and hug your families. This fight is now in the courts.”

In a different live-stream video, the group allegedly showed mixed feelings about the standoff. Some expressed plans to leave to return to their families, while others counted and doled out ammunition. According to the LA Times,

“I want to go to my wife,” a man could be heard saying Wednesday afternoon, complaining that his credit card was maxed out and he was driving a rental car. “Sorry, guys.”

“No hard feelings,” another man responded.

At one point, the live stream caught what sounded like the cocking of a gun, and at least six occupiers could be seen passing through the camera’s field of vision and discussing their available weapons and ammunition.

“You got enough rounds for the 12-gauge?”

It was unclear how many of Bundy’s followers still holed up at the Malheur National Wildlife Refuge south of Burns were ready to heed Bundy’s call for surrender, but more arrests were made later Wednesday at a nearby checkpoint established by federal and state law enforcement officials, according to the FBI.

The FBI and Oregon State Police said in a statement Wednesday night that 45-year-old Duane Leo Ehmer of Irrigon, Oregon, and 34-year-old Dylan Wade Anderson of Provo, Utah, turned themselves in around 3:30 p.m. And 43-year-old Jason S. Patrick of Bonaire, Georgia, did the same a few hours later.

As with Bundy and the seven others arrested a day earlier, officials said the men will each face a felony charge.

Meanwhile, details began to emerge about the confrontation Tuesday on a remote highway that resulted in the arrest of Bundy and other leading figures in the group of occupiers, and in the death of militant Robert Finicum.

Bundy followers gave conflicting accounts of how Finicum died. One said Finicum charged at FBI agents, who then shot him. A member of the Bundy family said Finicum did nothing to provoke the agents.

Also on Wednesday, a federal judge in Portland unsealed a criminal complaint that said the armed group had explosives and night-vision goggles and that they were prepared to fight at the refuge or in the nearby town of Burns.

Someone told authorities about the equipment on Jan. 2, when the group took over Malheur National Wildlife Refuge, according to the document.

Federal law officials and Harney County Sheriff Dave Ward held a news conference on Wednesday in which they called on the rest of the occupiers to go home. There is a huge law enforcement presence in the region, and the FBI has now set up checkpoints outside the refuge.

FBI agent Greg Bretzing said people could leave through checkpoints “where they will be identified.” He said negotiators were available to talk if they have “questions or concerns.” FBI officials said Wednesday night, in addition to the three men arrested, five people left the refuge through the checkpoints and were released without arrest.

At the earlier news conference, Bretzing also defended the FBI-led operation that resulted in the arrest of Bundy and other leaders, and in the death of Finicum. “I will say that the armed occupiers were given ample opportunities to leave peacefully,” he said.