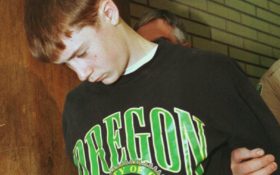 A man who killed two people and wounded 26 others in a 1998 shooting at an Oregon high school lost an appeal Thursday seeking to reduce his 111-year sentence.

The Oregon state Supreme Court ruled that Kip Kinkel’s sentence does not violate his constitutional protection from cruel and unusual punishment, even though the law shields minors in many cases from life sentences. Kinkel, now 35, was 15 when the shooting occurred on May 21, 1998, at Thurston High School in Springfield, Oregon.

The attack happened after he had killed his parents the day before. Kinkel had earlier been sent home after being discovered to have a brought a gun to school.

Kinkel received 25 years for each murder charge, along with additional time for 26 counts of attempted murder.

The episode was among the first school attacks in recent decades to seize the national spotlight, and predated prominent incidents around the country that have spurred a broader focus on school violence.

Kinkel’s attorney, Andy Simrin, said he was consulting with Kinkel and other attorneys over whether to appeal to federal court.

While the U.S. Supreme Court has in the past specifically restricted the situations in which minors can receive life sentences, the federal court generally hasn’t addressed crimes of the magnitude of Kinkel’s, said Phil Lemman, a spokesman for the Oregon Judicial Department.

During his original trial, Kinkel’s attorneys submitted testimony from mental health experts that he suffered from schizophrenia.

In the lone dissent in Thursday’s ruling, Judge James Egan noted the mental illness evaluation, and wrote that combined with his youth his culpability for the crimes should be reduced.

“Those crimes were committed by a child with a treatable mental disorder,” Egan wrote. “They do not show irreparable corruption.”