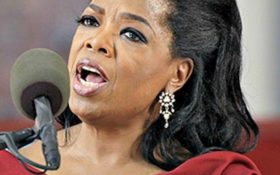 Will the 46th President of the United States be Oprah Winfrey?

It sounds far-fetched… unless you’re Oprah.

During a recent interview, the former daytime talk show host was pressed about her political ambitions — and admitted to Bloomberg TV she was toying with the idea of a presidential run.

Oprah told interviewer David Rubenstein that, before President Donald Trump’s improbable win in the November election, she never considered herself to have a realistic shot to be president.

“I actually never thought that that was… I never considered the question even a possibility,” Oprah said on an appearance on “The David Rubenstein Show.”

Apparently, all that has changed.

When presented with the idea in the past, Oprah said she “thought, ‘Oh, gee, I don’t have experience. I don’t know enough. I don’t.'”

But following Trump’s victory over former Secretary of State Hillary Clinton, however, Oprah hinted that she is now intrigued by the possibility of being president.