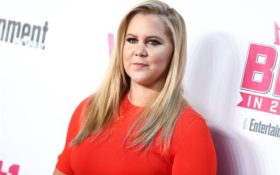 Prior to the election, a host of Hollywood stars and celebrities claimed if Republican nominee Donald Trump won the election, they would leave the United States.

Now? It seems they say things just to hear themselves talk, because Trump is the President-elect and all of those stars are (unfortunately) still here.

Two days after the election The Horn News reported on 10 celebrities that were planning to move away when Trump won. Since then, there hasn’t been a single exit — but there’s been a WHOLE bunch of excuses.

Actress and comedian Amy Schumer released a lengthy Instagram post following the election, in which she explained that her threat to move to London was “jest.”

The rest of the post writes off Trump voters as “disgusting,” “weak,” “misinformed,” and, ironically, “kicking and screaming babies.” She then whines about the results of a fair and democratic election that broke her heart into “a million pieces.”

She also praises herself for not getting paid to support Clinton, claiming it wasn’t a problem because she is “fortunate enough to make a high income.” Just further proof that these liberal cry babies have no zero understanding of the problems of average, everyday Americans.

And Schumer isn’t the only one struggling with the results.

Actress Lena Dunham, who spent a lot of time campaigning for Clinton, defended her promise to move to Canada. She posted on Instagram, “for those demanding I move to Canada based on something I said when this man seemed like a steak salesman with a long shot at the presidency: stay busy reveling in your new regime.”

A few days later, she had another idea almost as brilliant as moving to Canada: asking rocks for advice. W

Dunham posted to Instagram a photo of herself in Arizona with the caption, “Asked the Canyon for some guidance. She said this week is going to be revolutionary, and so I threw my arms open and said ‘bring it.'”

We can suspect that idea won’t work out either.

The only celebrity to suggest he may follow through with the move is actor and comedian George Lopez. He posted to Instagram that he was going to rent first and get to know the schools.

In the meantime, the overpaid comedian is still living in the states and is actively posting his thoughts on Trump to Instagram.

Civil rights activist Al Sharpton claimed he’d be out of here if Trump won. But now that it’s time to pack his bags, Sharpton can’t follow through. He told TMZ, “All of us said that. That was said in jest. We’re not going anywhere.”

As for the remaining celebrities The Horn News reported would leave Trump’s America, they’ve convientely ignored the fact that they even made these statements, and are still relaxing in their million dollar homes from coast to coast.

Turns out they’re even better actors off screen.