What does the coming “super El Nino” mean for your weather? - The Horn News 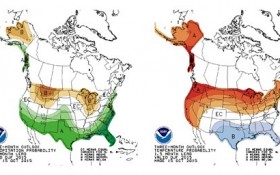 El Nino is coming to the United States this winter and it’s bringing a lot of rain with it. The weather front will leave a big wet (but not necessarily snowy) footprint on much of the United States, including parched California, forecasters said Thursday.

El Nino changes weather worldwide, mostly affecting the United States in winter. The weather pattern happens every few years when the Pacific Ocean warms up around the equator. This year’s is one of the strongest El Ninos on record.

NOAA expects a cooler and wetter winter for the South. For California, more precipitation than usual is expected during the critical time that its reservoirs usually fill, but there’s no guarantee. Only northern tier states, the Ohio Valley states and Alaska should be dry. 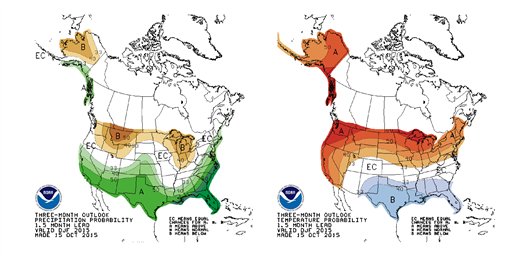 While California’s drought is likely to lessen in January, even the wettest winter on record — 33 years ago — didn’t have enough rain to wash out the current four-year drought, said NOAA hydrologist Alan Haynes of the California Nevada River Forecast Center.

Forecasters see a milder, warmer winter north of the Mason-Dixon line and for all of California and Nevada. Texas and the Deep South are forecast to be cold.

Overall, the nation should have 2 percent fewer days when people have to fire up their furnaces, said Halpert. He said the Northeast, where it was chilly and snowy last year, should see 6 percent fewer heating days.

Because of El Nino, NOAA is more confident than usual that its forecast is on target — 70 percent for a wet South, Halpert said.

The federal winter forecast doesn’t address snow, just wet or dry and warm or cold. Even though it’s likely to be both cooler and wetter in the South, it is usually so warm there that it needs a blast of Arctic air for snowstorms and that’s not looking likely, Halpert said. And while the north is likely to be warmer, past El Ninos have had some big snowstorms.

Historically, because there’s more storminess during El Ninos, there’s been a slight but not great increase in snowfall in the Northeast during El Ninos, said NOAA El Nino expert Michelle L’Heureux. But that could be skewed by a few big years in the past like the winter of 2009-10, she said. The Great Lakes area tends to get less snow during El Ninos, she said.

Private forecast firm Weather Bell Analytics predicts a swath from New Mexico across to the Carolinas and up the coast to Connecticut will get 50 percent more snow than usual.

AccuWeather, another private firm, sees severe thunderstorms in Florida, but forecasts less lake-effect snow around the Great Lakes, occasional mild days for the Midwest and says it will be “not as brutal” for the Northeast.