Manning vs. Brady: One last duel for the ages - The Horn News 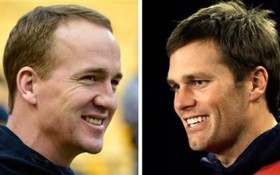 The final chapter of the greatest quarterback rivalry in NFL history plays out in all likelihood Sunday with the 17th meeting between Tom Brady and Peyton Manning.

New England and Denver play again next season, but Manning is expected to have received his gold watch — and maybe another silver trophy — by then.

In that case, Sunday’s showdown in the AFC championship between the Patriots and Broncos would mark both the crest and the culmination of a clash that defines the two quarterback greats who transformed the game and transcended the sport.

“This is Jesse James and Wyatt Earp standing out in the street at high noon for the last showdown,” Joe Theismann said. “You’ve got arguably the two greatest players that ever played the position. Peyton revolutionized the game and Tom, through his championships, has proven he’s the best that’s ever played the game.”

Their respectful rivalry — they’re neither best buddies nor mortal enemies — began on a cloudy afternoon in Foxboro Stadium on Sept. 30, 2001, and grew into something on par with Arnold Palmer vs. Jack Nicklaus or Wilt Chamberlain vs. Bill Russell.

“Our sports society is built around stars, and stars draw people to the game, those are the players they want to watch. You want to watch Ali and Frazier, Bird and Magic, Brady and Manning,” said Tony Dungy, the coach of the Colts for Manning’s only Super Bowl win. “We are seeing two just top-tier guys and everyone will root for one and against the other and pick sides and argue who is the best. It draws people, and it especially draws the casual people to the game.”

This generation of football fans may never see anything like it again.

“Every football fan should watch this game because very seldom in life do you get to see two competitors as great as they are with this much at stake,” Theismann said. “It’s what’s at stake that makes this one more interesting.”

At stake: a shot at history and sweet revenge.

With a seventh trip to the Super Bowl, Brady, still on top of his considerable game at age 38, would get a crack at a fifth Super Bowl ring, something no starting QB has ever accomplished. He’d also put himself one win away from the satisfaction of seeing Roger Goodell hand him another Lombardi Trophy. This, less than a year after the commissioner suspended him in the scandal over deflated footballs, a ban that was overturned in federal court last summer.

With a fourth trip to the Super Bowl, Manning, two months shy of 40 and a shadow of his five-time MVP self, would have a chance to become the first starting quarterback to deliver a Lombardi Trophy to the headquarters of two franchises. He’d also have a shot at recouping every penny of the $4 million pay cut he took last winter and get the chance to ride off as a champion into that orange sunset — like his boss, John Elway, did nearly two decades ago.

Brady has won 11 of the 16 previous meetings, but they’re 2-2 in the playoffs, including Denver’s 26-16 win in the conference championship two years ago. That game was also in the Mile High City, where Brady has walked off the victor in just two of his eight visits.

Although the two are never on the field together, save for the pregame warmups and postgame handshakes, each is acutely aware of the other’s presence. They know they must minimize mistakes and magnify precious possessions.

“He’s an incredible player and any time you factor that caliber of player … you’ve got to be at our best,” said Brady, who led the league with three dozen touchdown passes this season despite missing many of his top targets for parts of the schedule. “You can’t play anything less than your best and expect to win, because he’s going to play well and he’s going to have that team playing well.

Manning never likes to make it about himself, but he, too, realizes there’s less room for error when Brady is waiting along the opposite sideline.

“I’ve always kind of given the boring answer, ‘Hey, it’s the Colts versus the Patriots and now it’s the Broncos versus the Patriots,'” Manning said. “All I can say about Tom Brady is he plays the position the way it’s supposed to be played. He’s extremely talented. He’s a very hard worker, very competitive guy and he just plays the position the right way. When you do that, there’s a reason you play for a long time and play well for a long time.

“There have been a lot of different players that have played in 16 of those games, but as the quarterback, it’s always been a great honor and privilege to have competed against him that many times over the course of the past 16, 17 years he and I have been in the league together.”

Denver’s DeMarcus Ware declared, “The clash of the Titans is here again.”

The New York tabloids called it the clash of the “Taintans,” a reference to Brady’s “Deflategate” and Al Jazeera’s report that Manning obtained HGH shipments through his wife from an Indianapolis anti-aging clinic.

Both had each other’s back during their off-the-field tribulations.

“Tom has always been in support of me,” Manning said, “and I always try to be the same for him.”

While Brady seemingly has many more chances for glory, Manning’s career is clearly at its sunset.

Not only did he miss nearly half the season with an injured left foot, but he threw just nine TD passes and 17 interceptions — which happen to be identical to Bart Starr’s stats in 1967 when he guided Green Bay to a second straight Super Bowl championship.

Much like Elway in his twilight, Manning no longer has to carry the Broncos, nor do their fortunes ride solely on his right arm. His body betraying him, Manning has gone from being quarterback blue blood to serving on the scout team, then as a backup for the first time since his freshman season at Tennessee. But three weeks ago he got his starting job back.

And on Sunday he gets to face Brady one more time, the stakes never higher.