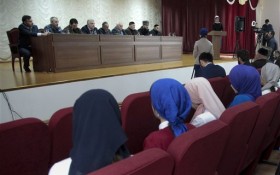 Thousands of Russian Muslims have joined ISIS in Syria, and some have taken senior positions.

Islamic militancy has engulfed Russia’s North Caucasus, Dagestan in particular, following two separatist wars in neighboring Chechnya. While nearly 1,000 people are believed to have left Dagestan from Syria, the number of Chechen recruits is far lower.

Chechnya’s authoritarian leader, Ramzan Kadyrov, said last month that less than 500 Chechens are believed to have joined ISIS and that about 200 of them have already been killed. Kadyrov has recently gone as far as offering to send thousands of Chechen fighters as ground troops to fight IS.

Local students say many of their peers are tempted to go to Syria because they believe in a true Islamic state there.

“Even those girls who study well are trying to go there (to Syria),” said Grozny student Albina Maltsagova.

To counter ISIS propaganda, Islamic clerics and government officials are holding meetings with high school and university students on how to avoid ISIS recruitment, explaining that the group distorts the true meaning of the Quran.