One conservative has sneaky impeachment plan (OUCH!) - The Horn News 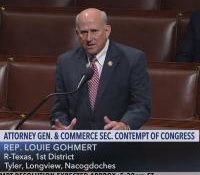 President Donald Trump has called on Republicans to fight back against the Democrat-led impeachment proceedings.

And one conservative lawmaker took things a step further, suggesting that the GOP is preparing to impeach… 2020 candidate Joe Biden!

Should Biden be the president-elect of course….

Rep. Louie Gohmert, R-T.X. made the remark on Monday during the impeachment hearing.

He said everything would be in place if he somehow beat Trump.

“We’ve had people already mention the next president, Joe Biden, he may be the next president,” he said. “Well. We’ve already got the forms, all we have to do is eliminate Donald Trump’s name and put Joe Biden’s name in there, because he’s on video. He and his son. He basically has admitted to the crime that’s being hoisted on the president improperly.”

The Texan Republican tore into the Democrats and their impeachment efforts, labeling the television spectacle a “kangaroo” court — alluding to an unofficial court in which lawmakers try to charge someone with a crime without credible evidence.

“I’ve been in some kangaroo hearings in courts, not my own, but I have been mistreated in hearings before, but I have never seen anything like this. It’s not about due process, this is about a kangaroo system, and let me tell you, those that think you’ve done something special here, you have set the bar so low, I’m afraid it’s irreparable,” Gohmert said.

“I’m scared for my country,” Gohmert added. “I’ve never seen anything like this. This is supposed to be the Congress! I came up here from a court where we had order and we had rules and I’ve seen nothing of the kind in here today, and it’s outrageous that we’re trying to remove a president with a kangaroo court like this.”

If conservatives are already able to impeach Biden, it likely wouldn’t take them long to set the order in motion.

It has been well-documented that his son, Hunter Biden, used Joe’s political position to secure a spot of the board of the Ukrainian gas company, Burisma, where he was paid up to $50,000 a month, according to Page Six reports.

You can watch a video of Gohmert going OFF below: