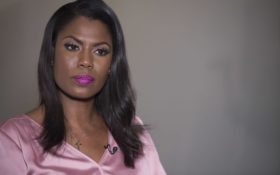 On Thursday, she was invited onto the “Bernie and Sid in the Morning” radio show to be challenged by the hosts on the criticism facing her book’s honest. But she didn’t see this question coming.

The former White house official was left speechless — and hung up the phone — after host Bernie McGuirk called Omarosa a “rat” and questioned her motives.

Listen to the interview here —

“It wasn’t just substance, you smeared his marriage, you actually said that Trump ‘covets his daughter.’ Can you understand why people would think, and why Trump would think, that after what you did after what he did for you, was so despicable?” McGuirk challenged.

Omarosa skirted over the question and claimed she didn’t actually believe the president said those things… despite writing it in her so-called “tell-all” book.

“Well you’re trying to make that correlation, but in “Unhinged,” I pull back the curtain on everything… it’s bigger than us, it’s about the country, it’s about the democracy, it’s about our freedom — and those things are being challenged by someone who is not mentally fit to be in office,” Omarosa claimed.

That response prompted McGuirk to dish out an angry response to Omarosa saying, “Omarosa, you come off as a back-stabbing weasel. You really do. I hate to say that to you, but that’s a fact.”

Omarosa did not take that criticism lightly.

“You come off as a hater,” she responded.

McGuirk fired back, “I’m not a hater. You come across as … you said, ‘It’s not about me.’ It sounds like it’s all about you. This man … what he’s done for this country is incredible.” He added, “You are a hater, and you are an ingrate … and a rat!”

And then… boom! Omarosa hung up the phone and the interview was over.

As the saying goes, “Don’t dish it out if you can’t take it.”

Someone needs to share that classic cliche with Omarosa.