Omarosa has insane MELTDOWN on TV [video] - The Horn News 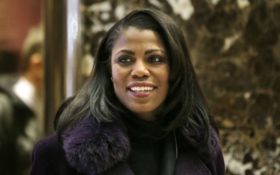 Omarosa Manigault Newman is starting to tell her story, as promised. And the former White House aide’s story is: America is not going to be fine under President Donald Trump.

“No,” a tearful Manigault Newman, who left her White House job in December, said to her “Celebrity Big Brother” co-star Ross Mathews when he asked if the country will be OK.

“It’s going to not be OK. It’s not. So bad,” she added, speaking in the conspiratorial whisper that cast members use to keep competitors in the “Big Brother” house from overhearing them. Viewers, however, get to.

In response, the White House reminded reporters at the daily briefing that Manigault Newman was fired repeatedly on “The Apprentice” — and once by the White House.

“Not very seriously,” said spokesman Raj Shah, when asked about how the White House reacted to the comments. “Omarosa was fired three times on ‘The Apprentice.’ And this was the fourth time we let her go. She had limited contact with the president while here. She has no contact now.”

On the reality show, Manigault Newman says she was “haunted by tweets every single day,” and wondered: “What is he going to tweet next?” She says she wanted to stop him, but “all the people around him attacked me,” blocking her access.

Mathews then asked who does have the power to influence the president. “It’s not my circus, not my monkeys,” replied Manigault Newman. “I’d like to say not my problem, but I can’t say that because it’s bad.”

Sponsored: Are you using these 4 household chemicals right now? [STOP!]

She said she would never again vote for Trump, whom she met as a contestant on his TV show “The Apprentice,” which aired in 2004.

Manigault Newman was an assistant to the president and director of communications for the Office of Public Liaison until she was fired in December. She is now one of 11 cast members on “Celebrity Big Brother,” and was not in danger of being eliminated after Thursday’s episode.

On the show, Mathews told her that he “never got” why she joined the White House.

“It was a call to duty,” she says. “I felt like I was serving my country, not serving him … it was always about the country.”

Her affiliation with Trump was challenged by another cast member, Keshia Knight Pulliam, who as a child starred on “The Cosby Show.”

Manigault Newman compared her loyalty to the president to that of Knight Pulliam for Bill Cosby.

Knight Pulliam, who has said accusations of sexual abuse against Cosby didn’t reflect the man she worked with and knew, rejected the parallel.

“It’s a different situation because this man is running the country and being a voice of a whole country,” she said of Trump.

In December, Manigault Newman told “Good Morning America” that she had “quite a story to tell.”

“And when I can tell my story, it is a profound story that I know the world will want to hear,” she said.