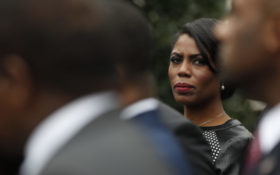 The liberal media has big deal over the resignation of Director of Communications for the White House, Public Liasison Omarosa Manigault-Newman.

If you watch the mainstream media, it was the world’s biggest blow-up. She was literally dragged out of the president’s office, they claim! Screaming and fighting, they say!

Only one problem. Everyone that was there says that’s totally fake news.

The U.S. Secret Service has denied all allegations that Manigault-Newman  was escorted over the White House grounds, but that does not stop the liberal media from spreading this over-sensationalized nonsense — rather than reporting real stories like the allegations of voter fraud in Alabama’s special election.

According to several liberal media sources, an unnamed White House official reported that Manigault-Newman was “physically dragged and escorted off the campus” late Tuesday. Of course, the report was once again off-the-record.

They even went as far as to say that Manigault-Newman wanted to confront White House Chief of Staff John Kelly and President Donald Trump at the White House.

But the truth? The Secret Service quickly shot down this rumors.

The Secret Service was not involved in the termination process of Ms Manigault Newman or the escort off of the complex. Our only involvement in this matter was to deactivate the individual's pass which grants access to the complex.

A White House aide also denied these allegations. When asked by a reporter if Manigaul-Newman was fired, she simply told them to refer back to the statement from White House Press Secretary Sarah Huckabee Sanders.

The statement from Sanders was simple: “Omarosa Manigault-Newman resigned yesterday to pursue other opportunities. Her departure will not be effective until January 2018. We wish her the best in future endeavors and are grateful for her service.”

You read that liberals? It clearly stated her departure will not take effect until January…. now why would the secret service physically drag someone out of the office… a month in advance of them leaving their post?

Trump chimed in on the resignation announcement by thanking Manigault-Newman for her service.

Thank you Omarosa for your service! I wish you continued success.

Tuesday was Manigault-Newman’s last official day, but Jan. 20 will be her official exit date.

In an interview with ABC News on Thursday morning, Manigault-Newman repeatedly denied any allegations of confronting Kelly at a White House Christmas Party, nor did she break into the White House residence to ask Trump about her dismissal. It’s all “fake news.”

The truth behind all these fake new reports is that Manigault-Newman unsuccessfully negotiated a new contract.

There are likely to be more White House officials resignations to come in the new year. It’s a normal part of business in the executive branch — contracts are reviewed, negotiated, and some people choose to pursue new opportunities in their careers.

Anything else is simply fake news.