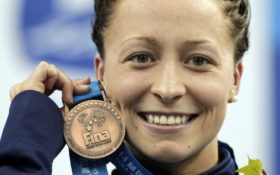 World champion swimmer Ariana Kukors has accused an U.S. Olympic team coach of sexually abusing her starting when she was 16, the latest misconduct allegations against those charged with caring for young athletes.

It’s another scandal for the U.S. governing body of swimming and for the sports world, which was rocked by a litany of sexual misconduct by former USA Gymnastics sports doctor Larry Nassar. For its part, USA Swimming revealed in 2010 that sex abuse allegations were mostly to blame for lifetime bans of 46 members and said it set up training and enhanced screening for all coaches, officials and volunteers.

That same year, coach Sean Hutchison faced an investigation over his ties to Kukors, but it was closed with no misconduct found. USA Swimming said Thursday that it learned of the underage abuse allegations this week.

Kukors, now 28, told authorities that Hutchison took thousands of sexually explicit photographs of her, according to a search warrant document filed by a federal agent.

She told officers that he kissed and touched her when she was 16 and engaged in sexual activity with her when she was 17 at the Pan Pacific Swimming Championships in Victoria, British Columbia, the document said.

Hutchison denies abusing Kukors and has not been charged with a crime. U.S. and local authorities seized electronic devices from his Seattle apartment this week that they say may contain evidence, the Seattle PI reported .

Kukors, the 2009 world champion in the 200-meter individual medley who placed fifth in that event in the 2012 Olympics, accused Hutchison of “grooming” her for sexual abuse when she was 13 and he was her coach at a Seattle-area swim club.

“I never thought I would share my story because I was able to leave a horrible monster and build a life I could have never imagined for myself,” she said in a statement released through her attorneys Wednesday. “But in time, I’ve realized that stories like my own are too important to go unwritten.”

Hutchison, 46, who was an assistant coach on the 2008 U.S. Olympic team, said the two were in a relationship after the 2012 Olympics and that she lived in his Seattle home for more than a year.

“At no time did I ever abuse Ariana Kukors or do anything with her that was not consensual,” he said in a statement released by his attorney. “I absolutely deny having any sexual or romantic relationship with her before she was old enough to legally make those decisions for herself. Prior to that time, I did nothing to ‘groom’ her.”

The investigation comes amid scrutiny over the supervision of people who work with young athletes. Nassar was recently sentenced to decades in prison in a case that led to a reckoning for the gymnastics governing body, with top executives resigning and the entire board of directors planning to step down as requested by the U.S. Olympic Committee.

Kukors’ attorney in California, Robert Allard, compared his client’s case to the one against Nassar.

“Much like the USOC knew about Larry Nassar years before his arrest and did nothing, USA Swimming had notice in 2010 that Sean Hutchison was involved in an inappropriate coach-athlete relationship with Ariana and took no actions to protect her or other swimmers,” he said in a statement.

Mike Saltzstein, a former vice president of USA Swimming who previously complained about the organization’s handling of sexual abuse cases, questioned the thoroughness of the 2010 investigation.

“I was astounded that it was closed so quickly,” he said in a telephone interview from San Diego, adding that a thorough investigation may have uncovered other problems, including allegations of underage abuse.

“Now with the benefit of hindsight and time, one would have to question whether there was any integrity to the first time they did this investigation,” he said.

USA Swimming said Thursday that Kukors’ statement was the first time it learned of the allegations and that “our hearts go out to Ariana and the difficulty she has gone through to reach this point of disclosure.” It said it was notified in January of a case against Hutchison filed with the U.S. Center for SafeSport.

USA Swimming said it hired a private investigator in 2010 after learning of a rumored relationship between Kukors, then 21, and Hutchison, then 39. It said both parties denied a romantic or sexual relationship and the investigation was closed without any violations.

Hutchison left coaching afterward but remains a member of USA Swimming as the owner of member club King Aquatic near Seattle, the organization said.

Club head coach Michael Brooks said Hutchison has stepped down as an executive and has not directly interacted with swimmers for a long time.

Olympic medalist Margaret Hoelzer, Kukors’ former teammate, said she never heard of Hutchison sexually abusing anyone but rumors were rampant that he and Kukors, then 21, were in a relationship.

“Naively, I should have probably realized it could have started earlier and could have been abuse. I wish I had,” she said, adding that dating is common among coaches and their athletes in the sport.

However, Hoelzer said Hutchison was partly why she retired in 2010.

“He was very emotionally and verbally abusive person. He was a very controlling individual, but he was that way to everyone,” she said.

The investigation began Jan. 23 when police in the Seattle suburb of Des Moines got a report about sex crimes at its city pool. They were alleged to have occurred between 2002 and 2007.

Authorities, who notified the U.S. Department of Homeland Security because of potential crimes outside the state, say detectives are working to determine what crimes are within the statute of limitations, where else they may have occurred and whether other potential victims or witnesses exist.

Kukors said she came forward to empower other victims.

“Not for the sake of you knowing my story, but for the little girls and boys whose lives and future hangs in the grasp of a horribly powerful and manipulative person,” she said.

“That they may not have to go through the same pain, trauma, horror and abuse. That their parents, mentors and guardians are better able to spot the signs of grooming and realize its tragic consequences before it’s too late,” she said.