Olympians balance parenthood with competing for the gold - The Horn News 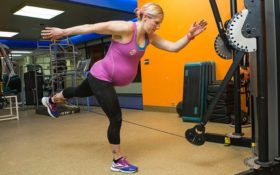 After finishing her fourth Winter Games in Sochi, Kikkan Randall decided: It was time to have a baby. But the cross-country skiing champion wasn’t ready to give up her Olympic goals.

So, at 32, she looked at the calendar and plotted her window: 2016, a gap year. No World Cup circuit and no Olympics. If things worked out as planned, Randall could get pregnant, give birth and be back in competition and qualify for Pyeongchang.

It’s the kind of calculation many ambitious career women are forced to make. For the three-time World Cup Sprint Champion regarded as a pioneer of American women’s skiing, there was one more challenge ahead before retirement: Pushing herself to a fifth and final Olympics after having a child.

“I’d worked really hard to get the pinnacle of skiing … I knew I couldn’t wait another four years to start a family,” said Randall, now 35, whose record-setting resume has earned her the nickname “Kikkanimal.”

“I’d had an amazing career up to that point,” Randall said. “I just felt like, in a sport like cross-country, where it takes so many years to develop to your top potential, I didn’t want to have to make the choice of career or family. I had a feeling I would be able to come back to skiing stronger, but it was definitely an unknown. If I had to pick one season to miss, it was a good one.”

Randall did get pregnant in 2015. Her son, Breck, was born the following spring. She is the only mother on the U.S. Olympic Team, which also has 20 fathers this year.

When Randall returned to competition in 2016, she wasn’t the only new mom on skis. Randall and her friend and competitor, Aino-Kaisa Saarinen of Finland, gave birth within two weeks of each other. Marit Bjoergen of Norway — regarded as the best woman in the sport — had her child four months earlier. French skiers Aurora Jean, Anouk Faivre-Picon and Caroline Hugue, and Slovenia’s Katja Visnar had new babies, too.

Most are competing in Pyeongchang, and have had to balance the challenges of parenthood and career with the help of fellow athletes, friends and family — and not always with the support of their workplace.

For Randall, skiing has often come first. When she married in 2008, there was training season to consider — along with the Alaska spring. She and Ellis wed at the beginning of May, shortly after both seasons began. One of her coaches officiated the ceremony.

After a couple of tries, Randall conceived in August 2015. She trained throughout her pregnancy, sticking to a shortened version of her twice-a-day routine, including running through her seventh month, interval training to keep her heart rate up, and weight training — which got her some funny looks in the gym as her belly grew.

Randall delivered Breck in April and , like many moms, was back at work after six weeks, missing only a month of the training season. She would pump breast milk between workouts, time feedings around her training, and bring Breck along in a baby jogger for hikes and runs. Easing the transition was a supportive husband, who works only in the winter, and Randall’s parents, who live close by in Anchorage.

“In today’s world it’s kind of the only way you can do it,” said her father, Ronn Randall, 68. “This is just a little bit on steroids here. But when she discussed it with us, I thought it was a completely natural thing to do. I knew it could have an impact on her career, but you don’t want a career to have an impact on your life, either.”

When Randall returned to the World Cup circuit in 2016, Breck was also in tow, along with both sets of grandparents. With several moms competing, race organizers set up a baby room at venues for breastfeeding or changing diapers. Extra credentials were made available for caretakers, who were also able to take advantage of the team rate for accommodations.

“It was the first time they’d ever done something like that,” Randall said.

There was also a new camaraderie among the ski moms, who set up a Facebook group for support and updates.

Randall had hoped to bring Breck to Pyeongchang for her final Games, but the cost of family housing proved too expensive. The 22-month old is with her husband’s parents in Canada.

Randall said she sees an opportunity for the International Olympic Committee to do more to support athletes who are also parents.

“I haven’t experienced it from the men’s side, but there are unique challenges when you’re a mother,” she said. “We’re not talking about 500 athletes here; we’re talking about maybe 10 mothers, more if we include fathers, and not everyone’s going to take advantage of it. It allows families to be close.”

Still, Ellis said after watching his wife over the past two years, it’s doable.

“You don’t have to choose one or the other,” he said. “If anything, she’s a more balanced athlete than she was prior to (having Breck).”

While she is hopeful for her Olympic prospects this year, as she heads into retirement, Randall said she already considers her decision “a really successful experiment.” She wants to encourage other women athletes who may also find themselves at this point.

“I’m blending the two most important things in my life: My family and my skiing,” Randall said. “It’s great to have another thing turn out so well.”