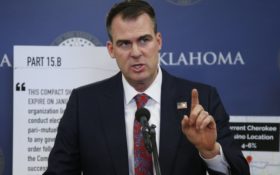 Oklahoma Gov. Kevin Stitt on Thursday banned state-funded travel to California in response to a similar ban California placed on travel to the Sooner State.

The first-term Republican issued an executive order that prohibits all non-essential travel by state employees to California, with exceptions for business recruiting trips, college sports games and trips by schools to participate in programs.

Stitt said in a statement that he was taking the action in response to similar travel bans imposed by California. Oklahoma was added to California’s travel ban in 2018 after passing a law that allows adoption agencies to deny placement services to same-sex parents. The City of San Francisco last year extended that ban to states with restrictive abortion laws, including Oklahoma.

“Enough is enough,” Stitt said. “If California’s elected officials don’t want public employees traveling to Oklahoma, I am eager to return the gesture on behalf of Oklahoma’s pro-life stance.”