After Ohio massacre, police warn rest of the family: “Arm yourselves” - The Horn News 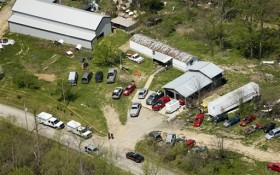 The slayings of eight family members in rural southern Ohio were sophisticated, planned executions, authorities said Sunday, as they also revealed that several marijuana-growing operations were found at the crime scenes.

Investigators said at a news conference that it’s unclear what, if any, role the marijuana growing had in Friday’s killings at four homes near Piketon. Marijuana, both recreational and medicinal, is illegal in the state.

They also told residents they are safe but to arm themselves if they’re fearful.

The killings were “a sophisticated operation,” Attorney General Mike DeWine said at a news conference in the small community that has been on edge since seven adults and one teenage boy were found shot in the head. Authorities remained tight-lipped Sunday about details of the investigation, any suspects or motives for the crime.

Pike County Sheriff Charles Reader said that in his 20 years in law enforcement, he never interacted with the Rhoden family “in a criminal nature.” He said it was clear the family was targeted, however, and he’s told the victims’ relatives to arm themselves.

Reader said he didn’t believe safety was an issue for others, but he said: “If you are fearful, arm yourself.”

Authorities have been scrambling to determine who targeted the clan and why. Investigators have interviewed between 50 and 60 people in hopes of finding leads, and a team of 38 people is combing wooded areas around the shooting scenes to ensure no evidence was missed, authorities said.

DeWine said the state’s crime lab was looking at 18 pieces of evidence from a DNA and ballistic standpoint, and five search warrants have been executed. Autopsies were expected to be completed Monday.

“This was very methodical. This was well planned. This was not something that just happened,” said Reader, noting most victims were targeted while they were sleeping.

Hanna Rhoden was in bed with her newborn baby nearby, authorities said. The infant was 4 or 5 days old. The newborn, Hannah Gilley’s 6-month-old baby, and one other small child were not hurt.

Since the slayings, authorities have refused to discuss many details of the crime, a potential motive, weapons, or the search for the assailant or assailants.

“We don’t know whether it was one or more people involved in this,” DeWine said Sunday.

Maggie Owens, a cook at the town’s Riverside Restaurant, said she’s counts herself among those who feel they’re on eggshells.

“I know a lot of people are just scared,” Owens, 39, said in a phone interview on Sunday. “You don’t hear about stuff like that around here.”

She said her son was friends with the younger Christopher Rhoden. She described Dana Rhoden as a woman with “a heart of gold” who gave her clothes and money when her home burned down last year.

More than 100 tips have been given to investigators, who’ve set up a number for people to call as police seek information about the crimes. A Cincinnati-area businessman also put up a $25,000 reward for details leading to the capture and conviction of the killer or killers.

Robin Waddell, who owns the Big Bear Lake Family Resort just south of Piketon, said Christopher Rhoden often did work for him as a carpenter and helped out with his excavation business. He said Rhoden was a nice guy whose kids sometimes visited him while he was working.

“It’s a large family,” Waddell said. “There’s a lot of them and they’ve been in this community for generations. So this is affecting a lot of people.”

Kendra Jordan, 20, said she often worked nights at a nursing home with Hanna Rhoden and described her as outgoing, funny and always smiling.

“If you were having a bad day, she’d be the first one to come up to you to question you about what was going on,” Jordan said. “She was amazing.”

The exact timing of the shootings remains unclear. Authorities got the first 911 call shortly before 8 a.m. Friday; the second came several hours later from another location.

Two of the crime scenes are within walking distance of each other along a sparsely populated, winding road that leads into wooded hills from a rural highway. The third residence is more than a mile away, and the fourth home is on a different road, at least a 10-minute drive away.

Todd Beekman, who owns an outdoors shop a few miles from the crime scenes, said at least one customer came in to stock up on ammunition after hearing about the shootings. But Beekman and others hanging out there midday Saturday said they weren’t concerned for their own safety because it’s an area where residents know and look out for each other.

“The word spread pretty fast, as it does in any rural area,” Beekman said. “Everybody’s kind of their own brother’s keeper down here.”