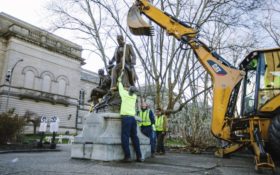 A 118-year-old statue of the “Oh! Susanna” songwriter was removed from a Pittsburgh park Thursday after criticism that the work is demeaning because it includes a slave sitting at his feet, plucking a banjo.

In October, the Pittsburgh Art Commission voted to take the Stephen Foster sculpture out of Schenley Plaza and find it a new home. For now, it will remain in a storage lot, out of the public view.

On Thursday, workers used straps and construction equipment to lift the 10-foot-bronze statue off its base. It was strapped to a flatbed truck and taken away.

The Giuseppe Moretti statue was completed in 1900 and thousands attended its dedication.

The shoeless banjo player is based on “Uncle Ned,” a fictional slave and subject of a song by the same name. Critics have long decried the statue as racist.

“It’s the single most offensive display of public art in Pittsburgh, hands down,” Paradise Gray, a hip-hop activist, musician and writer, told the Post-Gazette in August . “It permanently depicts the black man at the white man’s feet.”

Others say it highlights that Foster was inspired by black spirituals. Some historians contend the 1848 song is actually an early, subtle anti-slavery song.

A statue honoring an African-American woman will be put up in its place. Residents can submit nominations.

Foster, a Pittsburgh native, is often called the father of American music and was known for enduring tunes from the 1800s.