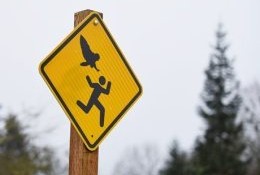 “Hoo” goes there!? City officials say they’re not surprised that an owl recently went on the offensive at Seattle’s Discovery Park.

Christopher Li says he was walking through the park on Wednesday evening when he suddenly felt sharp claws on the back of his head.

Li says he “freaked out” and began screaming and running as the owl chased him.

He was able to get away, but the owl left a small cut on his head.

Seattle Parks and Recreation education specialist Penny Rose told KING-TV young Barred Owls tend to become territorial around this time of year and that the department has had at least 10 reports of Discovery Park owl attacks this season.

David Takami of the parks department told KOMO-TV that the park might post warning signs if there are more attacks.