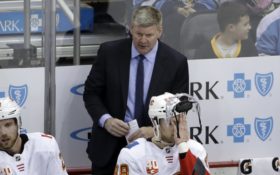 Calgary Flames general manager Brad Treliving said the team is looking into an accusation that head coach Bill Peters directed racial slurs toward a Nigerian-born hockey player a decade ago in the minor leagues, then arranged for the player’s demotion when he complained.

Akim Aliu tweeted Monday that Peters “dropped the N bomb several times towards me in the dressing room in my rookie year because he didn’t like my choice of music.” Aliu said he “rebelled against him,” and Peters responded by asking Chicago Blackhawks executives John McDonough and Stan Bowman to send Aliu to a lower minor league level.

The tweet did not name Peters, but referred to a “protege” of fired Toronto coach Mike Babcock’s who is now in Calgary. Babcock has been a mentor to Peters since Babcock coached him in college.

Aliu played under Peters in the Blackhawks system with the Rockford IceHogs of the American Hockey League during the 2008-09 and 2009-10 seasons. He was demoted to the Toledo Walleye of the ECHL during the 2009-10 season. Aliu, who was born in Africa but raised in Ukraine and Canada, later played seven NHL games over two seasons with Calgary.

Peters is in his second full season as the Flames’ coach.

Treliving made a statement to reporters moments after Calgary lost to Pittsburgh 2-1 in overtime Monday.

“We’re aware of a tweet from former player Akim Aliu,” Treliving said. “And obviously, we’re playing, so I haven’t had the chance to sit down with Bill or our people internally to talk about this and get to the bottom of it. We take these matters very, very seriously.”

He added that the Flames “will address it and get back to you people once we have a chance to speak internally.”

Peters was not made available to speak with reporters after the game.