Who kidnapped Americans in Iraq? Officials say they know - The Horn News 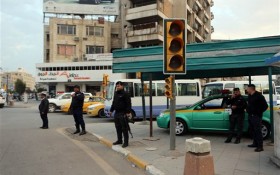 Two powerful Shiite militias are top suspects in the abduction of three Americans last weekend in a southern neighborhood of the Iraqi capital, an Iraqi police commander and a Western security official in Baghdad said Thursday.

The Americans were abducted in Dora, a mixed neighborhood that is home to both Shiites and Sunnis, on Saturday. It was the latest in a series of brazen high-profile kidnappings undermining confidence in the Iraqi government’s ability to control state-sanctioned Shiite militias, which have grown in strength as Iraqi security forces battle the Islamic State group.

Two Shiite militias — Asaib Ahl al-Haq and Saraya al-Salam — were likely behind the attack, the Iraqi and Western official told The Associated Press on Thursday.

“Nobody can do anything in that neighborhood without the approval of those militias,” the police commander said. The Western security official confirmed that Iraqi and U.S. intelligence assessments had narrowed down the suspects to those the two groups.

Both officials spoke on condition of anonymity because they were not authorized to talk to reporters.

One of the militias named as a suspect is backed by Iran, a key ally of Iraqi Prime Minister Hayder al-Abadi’s government.

Al-Abadi said on Thursday that he doubts that there is an Iranian link to the kidnapping, adding “we don’t know if they have been kidnapped… they just went missing.”

The U.S. Embassy in Baghdad has confirmed that several Americans are missing and said they are working with Iraqi authorities to locate them.

Speaking at Davos, U.S. Secretary of State John Kerry said that he was working with Iraq on the issue. He said he had also been in touch with Iranian Foreign Minister Javad Zarif to request help. He said Zarif had replied that he would do what he can, but that he had no “immediate knowledge whatsoever” about the incident.

Baghdad authorities said the three Americans were kidnapped from a “suspicious apartment” without elaborating, and have provided no other details. There has been no claim of responsibility.

The identities of the three were not made public and the two officials — the Iraqi commander and the Western official — did not elaborate on the investigation that is underway.

Another Iraqi intelligence official told the AP this week that from the Dora neighborhood the Americans were taken to Sadr City, a vast and densely populated Shiite district to the east, and there “all communication ceased.”

Lt. Gen. Abdul-Ghani al-Asadi, commander of Iraq’s elite counter-terrorism forces, told AP that his men are aiding in the search effort, which he said is focusing on “certain areas” of the capital Baghdad. He declined to give a more specific location.

Following the dramatic collapse of the Iraqi security forces in the summer of 2014, Shiite militias filled the vacuum, growing more powerful militarily than the country’s own security forces. They are some of the most effective anti-IS forces on the ground in Iraq, and also run security in many Baghdad neighborhoods.

But many trace their roots to the armed groups that battled U.S. troops after the 2003 invasion and kidnapped and killed Sunnis at the height of Iraq’s sectarian bloodletting in 2006 and 2007. In the fight against IS, human rights groups have accused them of abuses targeting Sunni civilians, charges denied by militia leaders.

Asaib Ahl al-Haq, Iranian-backed and one of the most powerful Shiite militias operating in Iraq, has repeatedly spoken out against the presence of U.S. forces in Iraq in the fight against IS. Saraya al-Salam is run by Iraq’s influential Shiite cleric Muqtada al-Sadr whose Mahdi militia often battled with US forces between 2003 and 2011.

Iraqi Prime Minister Haider al-Abadi has struggled to balance the power and popularity of the Shiite militias with the government’s dependence on the U.S.-led coalition’s contributions to the fight against the Islamic State.