Officials ask court to revoke Kennedy cousin's bail, send him back to prison - The Horn News 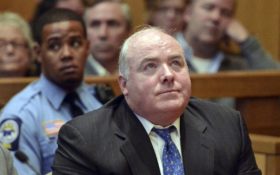 Connecticut officials are asking the state’s highest court to revoke Kennedy cousin Michael Skakel’s bail and send him back to prison, reminding justices it has been more than a year since they reinstated his murder conviction.

Skakel, a nephew of Robert F. Kennedy and his widow, Ethel Kennedy, was convicted of murder in 2002 in the bludgeoning death of Martha Moxley in their wealthy Greenwich neighborhood in 1975, when they were both teenagers.

He was sentenced to 20 years to life in prison. But another judge granted him a new trial in 2013, citing mistakes by his lawyer. Skakel was then freed after being allowed to post $1.2 million bail while he awaited the new trial.

Prosecutors appealed the lower court ruling to the state Supreme Court, which reinstated the conviction in December 2016 in a 4-3 ruling. Skakel’s lawyers asked the high court to reconsider the decision — a request that remains pending. Skakel has been allowed to remain free on bail pending that ruling.

In Monday’s petition to the Supreme Court, prosecutor James Killen wrote the court’s usual practice is to rule on a request to reconsider a decision within weeks, and it’s not clear why it is taking so long.

“The petitioner has enjoyed more than a year of additional freedom from serving his sentence, with only the most minimal restrictions on his liberty,” Killen wrote.

A spokeswoman for the state Judicial Branch on Tuesday cited a policy not to comment on pending cases.

The case has drawn international attention because of the Kennedy name, Skakel’s rich family, numerous theories about who killed Moxley and the brutal way in which she died. Several other people, including Skakel’s brother, Tommy Skakel, have been mentioned as possible killers, but deny any involvement. Skakel’s cousin, Robert F. Kennedy Jr., has written a book arguing Skakel is innocent.

The judge who ordered a new trial for Skakel ruled that his trial lawyer, Michael Sherman, failed to argue that Tommy Skakel could have been responsible for the crime and failed to present a key alibi witness for Skakel. Sherman has defended his work.