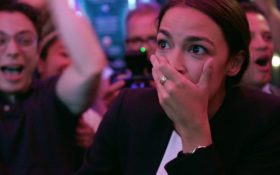 But the young congresswoman is also very popular with the far-left — and she’s ready to shake-up the 2020 presidential race with her endorsement.

Reports have surfaced that Ocasio-Cortez is seriously “entertaining” the idea of already backing a 2020 Democratic presidential candidate, and her list is very short: Sens. Elizabeth Warren, D-M.A., or Bernie Sanders, I-V.T.

“What I’d like to see in a presidential candidate is one that has a coherent worldview and logic from which all these policy proposals are coming forward,” Ocasio-Cortez said. “I think Sen. Sanders has that. I also think Sen. Warren has that.”

Given that much of both Sanders’ and Warren’s policies are increasingly radical, it’s a perfect fit.

And they could use the help. Both campaigns are faltering. Warren continues to put up dismal poll numbers, even with a new policy proposal for every month of the year. Sanders alienated many voters when he was discovered to be a hypocritical multi-millionaire just as the race is about to start heating up.

But Ocasio-Cortez could drastically alter the trajectory of either candidate she decides to back.

And it’s also known that under no circumstance is Ocasio-Cortez going to back former Vice President Joe Biden.

With Biden being the clear Democrat of choice according to a numerous amount of polls, this could severely injure the Democratic party.

Without an endorsement from Ocasio-Cortez, the far-left radicals will snub a moderate Biden in the general election — the exact same way scorned Sanders’ voters abandoned Hillary Clinton for President Donald Trump in 2016.

So that leaves Sanders and Warren.

Like her or not, experts say that Ocasio-Cortez’ celebrity would probably be enough to boost either one of the two heading into the primaries.

And it could shake up the entire race — with 18 months still to go.