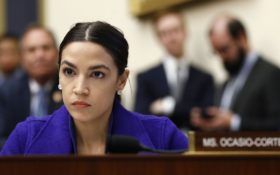 On Sunday, Sen. Lindsey Graham, R-S.C., pulled the rug out from underneath Rep. Alexandria Ocasio-Cortez, D-N.Y., and the Democratic Party.

While the establishment Democrats and the far-left are battling over whether to try and impeach President Donald Trump, Graham had a simple message for liberal lawmakers.

It’s not going to happen.

Graham went on CBS News’ “Face the Nation” on Sunday to let Ocasio-Cortez and her political allies know that Trump did nothing wrong — and the impeachment debate is nothing but political theater.

“What President Trump did here was completely cooperate in an investigation, a million documents, let everybody that the special counsel wanted to talk to be interviewed.”

“I believe the president did nothing wrong,” Graham added.

“I don’t care what [Trump and his lawyer] talked about,” Graham later said when asked if he thought Trump obstructed justice.

“He didn’t do anything,” Graham said. “The point is: The president did not impede Mueller from doing his investigation.”

As the chairman of the Senate Judiciary Committee, Graham is a critical figure in any potential impeachment fight in the future. Democrats would need 18 Republican senators to cross the aisle to their side — and that’s not going to happen, Graham said.

Ocasio-Cortez is one of the leading figures in D.C. calling for Trump’s impeachment, despite just 37 percent of voters supporting the idea.

“It’s just all theater,” the South Carolina lawmaker said. “It doesn’t matter. I don’t care what [Trump] said to Don McGahn. It’s what he did. And the president never obstructed.”

Graham went on to say he won’t even bother to call on Trump’s legal counsel to testify before the Senate.