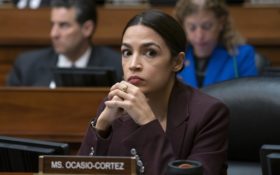 The far-left has a secret motto: Rules for thee, not for me.

First, it was Sen. Bernie Sanders, I-V.T., the multi-millionaire that refuses to give to charity. Despite years of blaming the rich for America’s problems, it turns out Sanders is at the very top of the “one-percent” he attacks.

He’s not the only socialist that’s been caught using their political careers to get rich. Rep. Alexandria Ocasio-Cortez, D-N.Y., was caught in a Hollywood cash grab.

She gained fame for chastising millionaires. Now she’s ready to cash in, and has hired a top Hollywood agent to help her get rich.

Just three months into her first term in office, Ocasio-Cortez is ready for her book deal.

According to Fox News, Ocasio-Cortez met with the talent agency Creative Artists Agency (CAA) to prepare a book deal.

The agency is big deal in Hollywood — they represent movie titans such as George Clooney and Brad Pitt.

Like any establishment politician who gets elected to office on big promises, critics say Ocasio-Cortez is ready to cash in. And if there’s any doubt how lucrative public office can be, just ask Sanders. Just last week he said we could all be millionaires too if we wrote a best-selling book.

All the average Joe needs, it seems, is mainstream media connections and a bigshot Hollywood agent.

Ocasio-Cortez’ communications director, Corbin Trent, tried to shove the news below the surface when asked about it by The Daily Beast.

He says book tours are “beyond matters of congressional work.”

In the midst of her first term, Ocasio-Cortez is ready to spend her office hours writing a book instead of working on solutions for America’s problems. And her team doesn’t want to answer any questions about it.

She’s not alone, either. The ever-controversial Rep. Ilhan Omar. D-M.N. — Ocasio-Cortez’s political ally — has signed a six-figure deal to write and publish a memoir through a HarperCollins Publishers division.

Like Sanders, Omar, and the rest of the socialist leaders throughout history, Ocasio-Cortez is ready to cash in.

Ocasio-Cortez BLASTED by Army hero (she was SPEECHLESS)